Your car represent your status in an effective manner and when you have something from the pool of luxury sports cars then definitely it should be a head turner. The top luxury sports cars are not only packed with a powerful engine that can give you track oriented experience, they are also packed with all-wheel drive systems to help you maneuver in some of the most challenging parts of the country. So, we have compiled a list of 18 best luxury sports cars 2017 that are currently available in the market and suits a range of requirements in an effective manner. 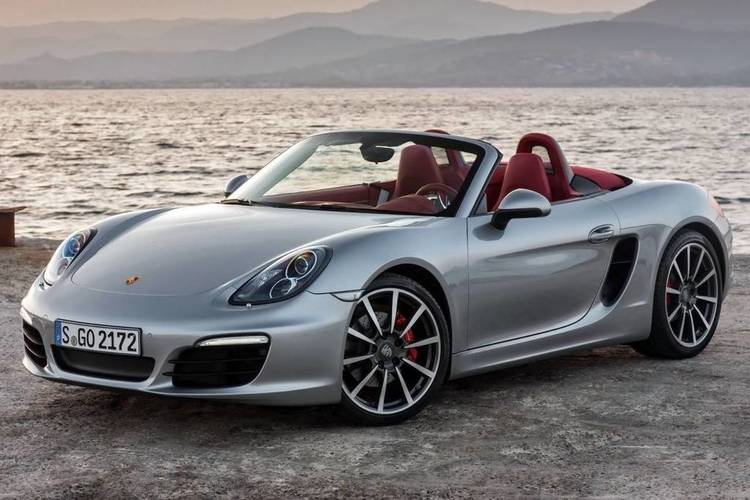 No list of best luxury sports cars can be completed without mentioning any member of the Porsche family and our list is no exception. We have started with Porsche Boxster that is known for its power packed performance and superb handling. It comes with a choice of three engines which include 2.7-litre with 265 hp maximum power, 3.4-litre with 315 hp maximum power and 3.4-litre in the GTS model with 330 hp maximum power. This sports car can go from 0-60 mph in just 4.1 seconds while the overall fuel efficiency of Boxster is between 22 mpg and 31 mpg. One can hit a top speed mark of 173 mph. 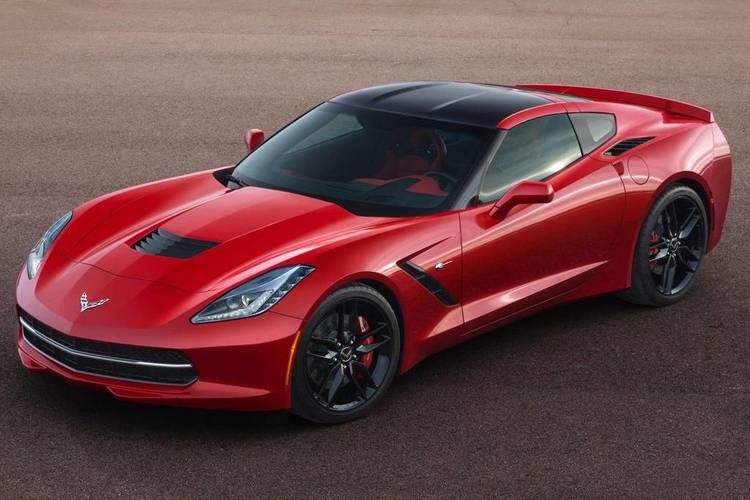 Next in our list of luxury sports cars is the Chevrolet Corvette that is a hardcore track ready performance car. This iconic American car was first introduced in the mid 50’s and since then it has ruled the hearts of thousands of petrol heads. It comes packed with a 6.2-litre V8 engine that can deliver 455 hp maximum power and peak torque of 460 lb-ft. In the sports exhaust, these figures reach to 460 hp and 465 lb-ft, which further improves the experience. Zero to 60 mph can be clocked in just 3.7 seconds while the top speed has a threshold of 181 mph. The mileage varies between 16 mpg and 29 mpg.

Porsche is considered as one of the best luxury sports car brands across the globe and the reason for that is the world-class performance cars in its fleet. One such car is the Porsche Cayman, which is at the 3rd spot in our list. The sports car is extremely nimble with a base engine of 2.7-litre which is rated at 275 hp. In the GTS version, the car is packed with a 3.4-litre unit that is rated at 340 hp maximum power which is coupled to a six=speed manual transmission. One can also upgrade to a 7-speed automatic transmission which can hit the 60 mph mark from zero in 4.3 seconds and top speed of 174 mph. The overall fuel efficiency varies between 22 mpg and 32 mpg.

Another sports car from the prominent German automaker is the 911. Yes, the Porsche 911 is the next sports car in our list which has been in the market since several decades. Though it is slightly costlier than the other cars in the segment, it is worth for its engaging handling and agile characteristics. The 911 is available in either a twin turbo or non turbo flat six-cylinder engine options that delivers a power output ranging between 370 hp and 430 hp depending on the option selected. With seven-speed transmission and all-wheel drive system, it can reach 0-60 mph in just 3.6 seconds while the mileage ranges between 19 mpg and 26 mpg. 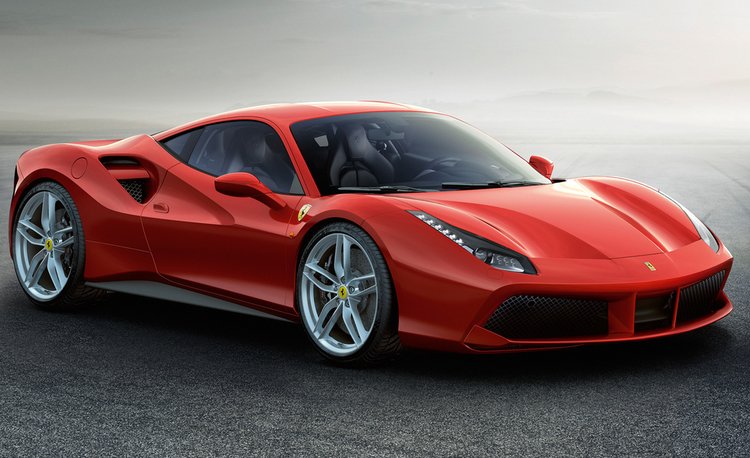 Another leading luxury sports car brand is Ferrari that has ruled the automobile industry for decades. The 488 GTB is the successor of 458 Italia that offers an extremely smooth ride. It comes with a 3.9-litre twin-turbo V8 engine that is rated at 660 hp maximum power and 561 lb-ft peak torque. The GTB can go from 0-60 mph in just 3.0 seconds and it is available with dual-clutch seven-speed automatic with a manual shifting mode. To offer sharp handling to the driver, the 488 GTB comes with new stability control system and can clock a top speed of 205 mph. It delivers a mileage ranging between 15 mpg and 22 mpg. 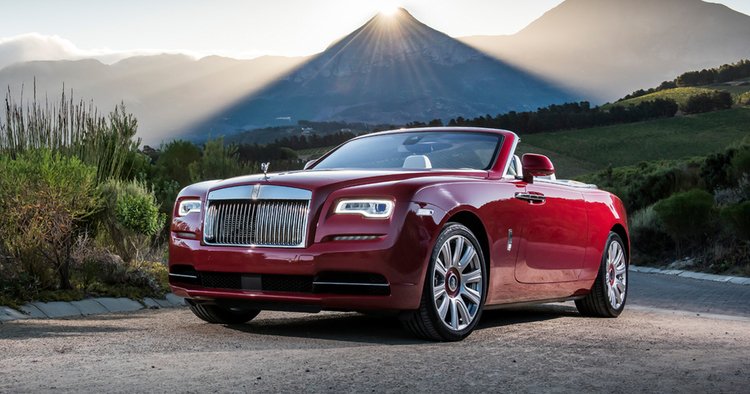 The epitome of luxury and performance, Rolls-Royce Dawn is the next member of our list. The Rolls-Royce Dawn is one of the top luxury sports cars in the market that is powered by a 6.6-litre twin-turbo V12 engine that delivers a maximum power output of 563 hp and peak torque of 575 lb-ft. The Dawn can go from 0-60 mph in just 4.8 seconds and can hit a top speed of 155 mph. With the recent design shift in the car, the updated Dawn comes with 2+2 arrangement that can accommodate 4 easily. 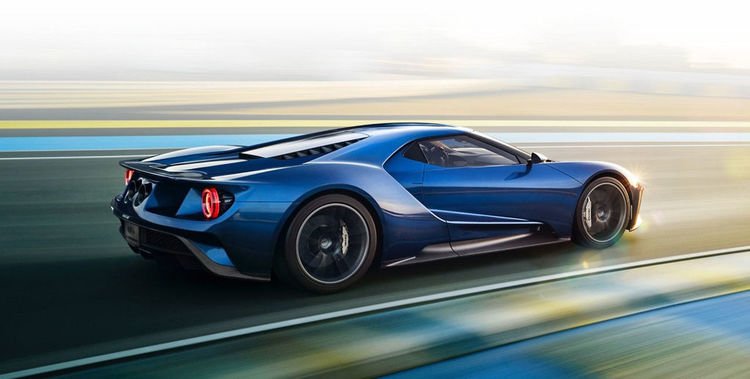 The Ford GT is one of the most potent luxury sports cars currently in the market. The sports car features a mid-range engine that is a V6 twin-turbo rated at 600 hp. It can go from zero to 60 mph in just 2.9 seconds. The improved handling and performance of the sports car is due to the full carbon-fiber construction and body panels to include active aerodynamics. It comes with rear wheel drive system and a 7-speed dual-clutch automatic transmission. The American automaker has also limited the production to just 1000 units in the first go.

BMW 4 Series can be termed as one of the finest affordable luxury sports cars as it offers better performance and great comfort. It is available in coupe and convertible edition, and packs a 2.0-litre turbo 4-cylinder engine that is rated at 240 hp maximum power. There is also a 3.0-litre turbo inline-six cylinder engine that is rated at 300 hp of maximum power coupled to an automatic transmission. The top speed of the car is 155 mph and has an acceleration of 0 to 60 mph in just 4.9 seconds. The fuel efficiency ranges between 21 mpg and 32 mpg.

Jaguar F-Type is known for its dynamic handling and advanced features. F-Type is available in convertible and coupe edition and the base trim is powered by a 3.0-litre V6 engine that is rated at 340 hp maximum power. Considering the S model of the car, it is powered by a 3.0-litre V6 unit that delivers 340 hp maximum power and comes with six-speed manual transmission that delivers the power to the rear-wheel. In the updated version, the F-Type is available in the all-wheel drive option and can go from 0 to 60 mph in just 4.9 seconds. It can clock a top speed of 171 mph. 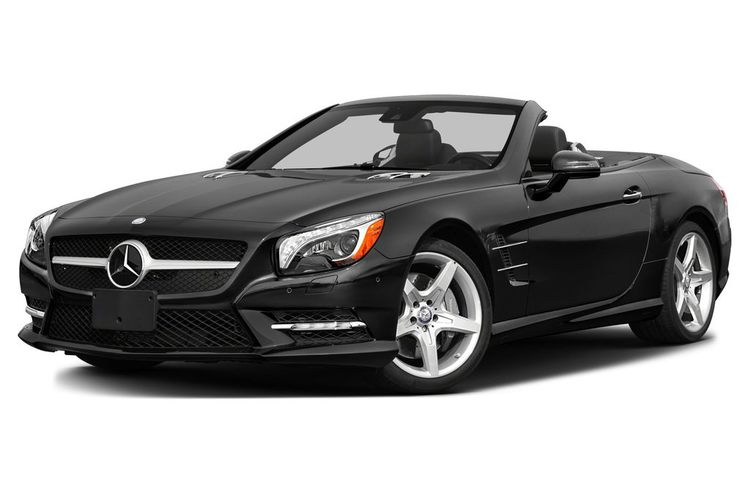 One of the most competent luxury sports cars of 2017 is the Mercedes-Benz SL Class that is powerful, stylish and impressive in various aspects. It is one of the most luxurious cars in the segment which does not compromise on the power front. It comes packed with a 3.0-litre twin-turbo six-cylinder engine that delivers 329 hp maximum power and coupled to a seven-speed automatic transmission that delivers power to the rear wheels. When you opt for SL550, the sports car gets an 4.7-litre twin-turbo eight-cylinder engine that delivers 449 hp maximum power. It can clock 0 to 60 mph in just 4.6 seconds while the fuel economy varies between 20 mpg and 27 mpg. 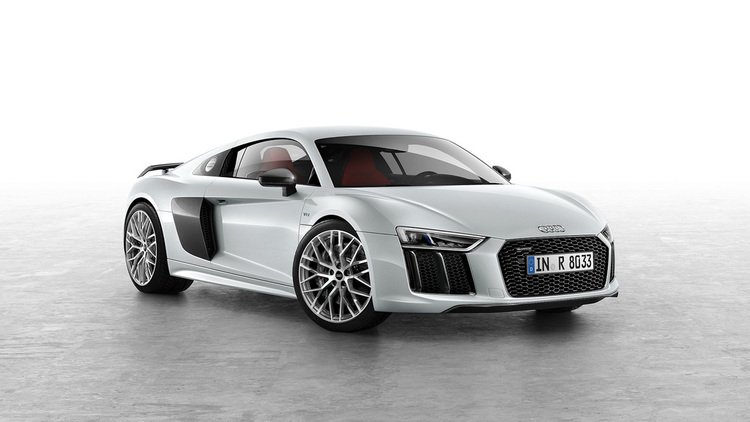 Since its introduction, Audi R8 has managed to grab the leading position in the sports cars segment. The driver centric cabin and advanced safety features of R8 makes it one of its kind. It offer a track oriented handling with different modes to suit even daily city commutation purpose. The R8 is powered by a 5.2-litre V10 engine that delivers 540 hp of maximum power. When it is upgraded to V10 Plus, the power is rated at 610 hp. The car top overall speed is 168 mph and can achieve 0 – 60 mph in just 4.0 seconds. The fuel efficiency ranges between 14 mpg and 23 mpg.

When it comes to some of the most iconic and legendary sports cars currently available in the market, Nissan GT-R finds its name at the top position. The Japanese luxury sports car is powered by a twin-turbo V-6 rated at 545 hp combined with all-wheel drive. The ‘Godzilla’ can hit a top speed of 191 mph and 0 to 60 mph in mere 2.9 seconds. Whereas, the 100 mph mark can be achieved in just 7.0 seconds. The overall fuel efficiency of the performance car ranges between 16 mpg and 23 mpg. 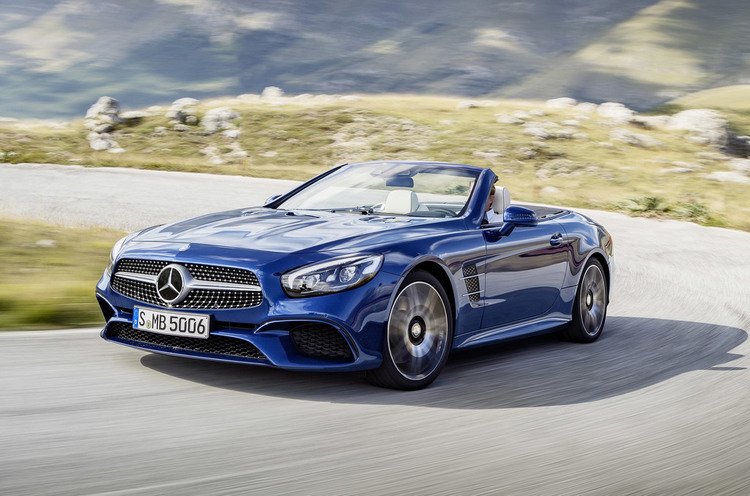 Another affordable luxury sports car is the Mercedes Benz SLK-Class that is next in our list. It is a great combination of performance and significant cabin space. It offers agile handling without compromising the comfort front. Powering the SLK-Class is a 2.0-litre turbo 4-cylinder engine that delivers 241 hp maximum power which is combined to a nine-speed automatic transmission. When you opt for SLK350, you get a 3.5-litre V6 that delivers 302 hp maximum power and gets 7-speed automatic transmission. One can hit 0-60 mph in just 6.3 seconds while the top speed is 155 mph. The overall efficiency measures 22 mpg in city and 32 mpg on highways.

When it comes to Italian manufacturers, they produce some of the finest and most competent track ready cars. One such name is the Alfa Romeo 4C which has impressed a number of customers from its explicit performance and engine response. It comes as a coupe and a targa top version. Powering the Alfa Romeo 4C is a turbo-four cylinder unit with 237 hp maximum power and 258 lb-ft peak torque. Clocking 0-60 mph take 4.2 seconds and it delivers a fuel economy between 24 mpg and 34 mpg. 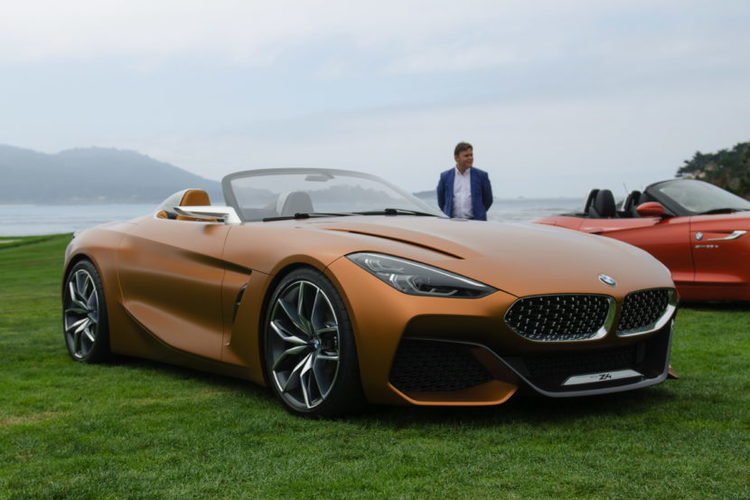 No list of luxury sports cars can be completed without mentioning BMW Z4 and our list is no exception. The updated Z4 comes with an upscale interior, nimble handling and a very poised ride. The two-seater comes with a 2.0-litre four-cylinder unit that delivers 240 hp maximum power and paired with a six-speed manual or eight-speed automatic transmission. One can also upgrade to sDrive351 that delivers 300 hp maximum power and can go from 0-60 mph in just 5.6 seconds and has a top speed of 156 mph.

When it comes to most smooth rides without compromising on the power of the engine, Jaguar XK is featured on the top position. It has Jaguar’s one of the most powerful engines that is calm and aggressive at the same time. It houses a 5.0-litre V8 engine that delivers 385 hp maximum power and coupled to an eight-speed automatic transmission with paddle shifters and rear wheel drive. The XK can go from 0 – 60 mph in just 5.0 seconds and has a top speed of 161 mph. It can deliver a fuel economy ranging between 16 mpg and 24 mpg. 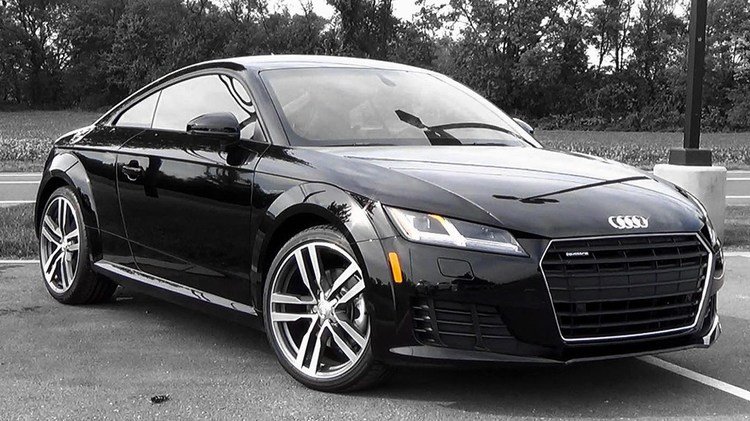 Audi TT is the next model in our list of luxury sports cars that offers driver-oriented interior cabin and road-hugging experience with the company’s Quattro all-wheel drive system. The roadster comes with a turbo four cylinder that is rated at 220 hp. For the ones who need additional power to keep up their adrenaline rush, the TTS model is available with 292 hp maximum power. Both the variants come with a six-speed dual-clutch automatic transmission and goes from 0-60 mph in 5.3 seconds. The top speed is 127 mph and the fuel economy varies between 23 mpg and 30 mpg. 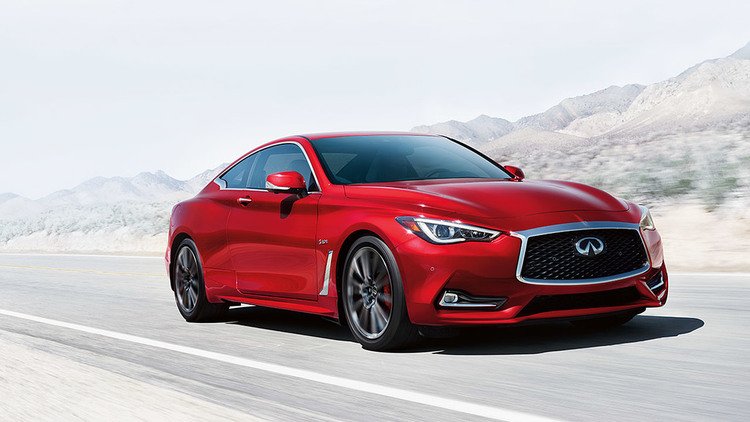 Infiniti Q60 is another top luxury sports car that is known for its calm nature yet aggressive characteristics. The convertible sports car is powered by a 3.7-litre V6 engine that delivers 330 hp maximum power and 270 lb-ft peak torque. It is further coupled with a six-speed manual or seven-speed paddle-shifted automatic transmission. Both the transmissions deliver the power to the rear wheels. It is also available with an all-wheel drive system and delivers a fuel economy between 19 mpg and 27 mpg.

So, these are the best luxury sports cars that are currently available in the market. There are other options as well that we might have missed in the list. Do let us know about your choice in the comment section and why you prefer that.