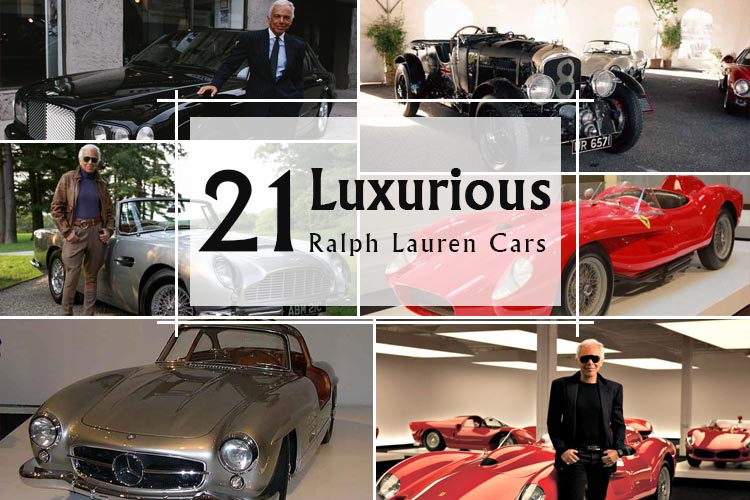 Ralph Lauren began stitching neckties out of a cramped room in New York, determined to change the American menswear scene. Within five years, his brand was retailing at Blolomingdale’s and Neiman Marcus. His first standalone boutique opened at Rodeo Drive, Beverly Hills in 1971. And before long, he began collecting cars, and lined up an impressive range of automobiles in his driveway. Over the years, Ralph Lauren cars became synonymous with luxury.

Let’s take a look at some of the most lavish members of the Ralph Lauren car collection. 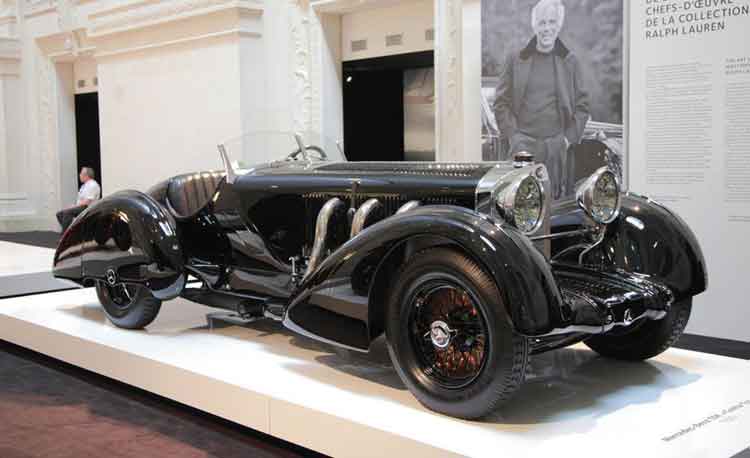 This was the one and only version of the car that was ever manufactured. The Count Trossi was a custom-built version of the already pretty-looking supercharged sports car to come out of the German automaker. This one was especially made for Italian auto-racing driver and car constructor Count Carlo Felice Trossi. The vehicle looked and meant business from every angle. 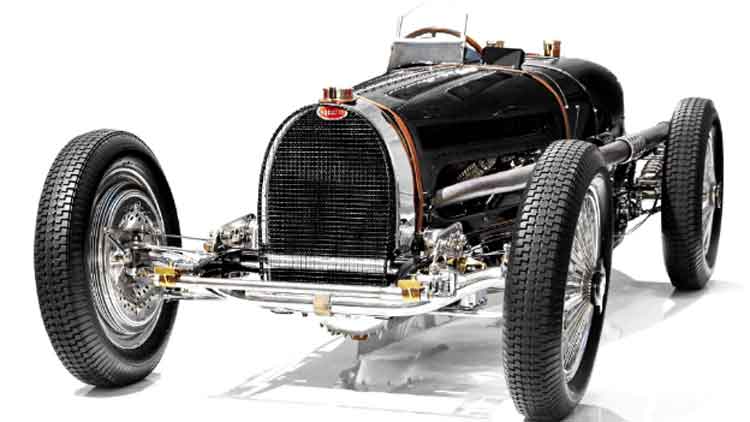 This one is a premium member of Ralph Lauren cars. Type 59 was Bugatti’s last Grand Prix vehicle and was a modified version of Type 54. It was widely considered one of the best looking Bugatti cars. It had a rip-snorting, crackling 3.3 liter engine tucked below an elegant and long hood. With 250hp, the vehicle was more of a fine jewelry piece. Nothing looked more gorgeous and all-conquering than this car. 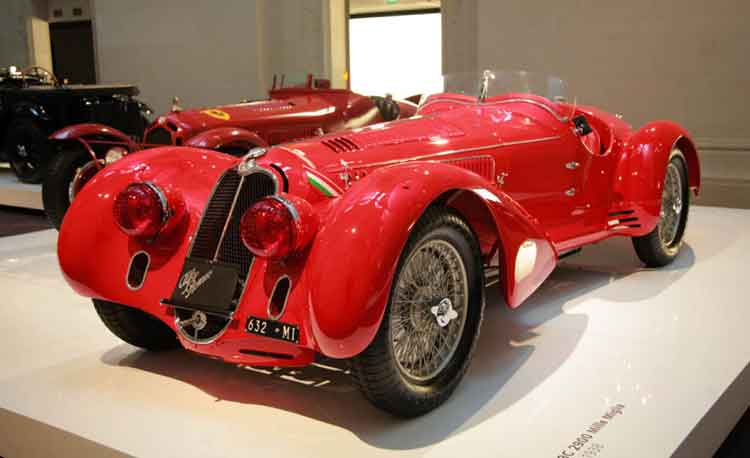 With a 225hp supercharged twin-power Straight 8 engine especially designed for the Grand Prix, the Alfa Romeo 8C 2900MM 1938 was a aluminum bauble beauty and the handiwork of the Italian genius Vittorio Jano. He was the brain behind Alfa’s success in motorsports during the prewar years. 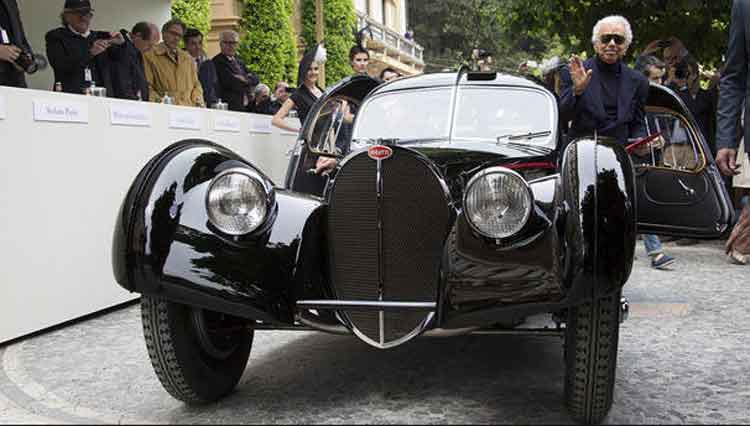 That’s a Bugatti again. Only four Atlantics were built and one of them is among the Ralph Lauren cars. With liquid bodywork and the signature “spine” seam, the Bugatti 57S Atlantic 1938 was a beauty. This was a tourist car based on Bugatti’s 1935 Aerolithe concept. The Aerolithe had a magnesium body and the panels couldn’t be brazed or welded. They were riveted. Thus came the seam. 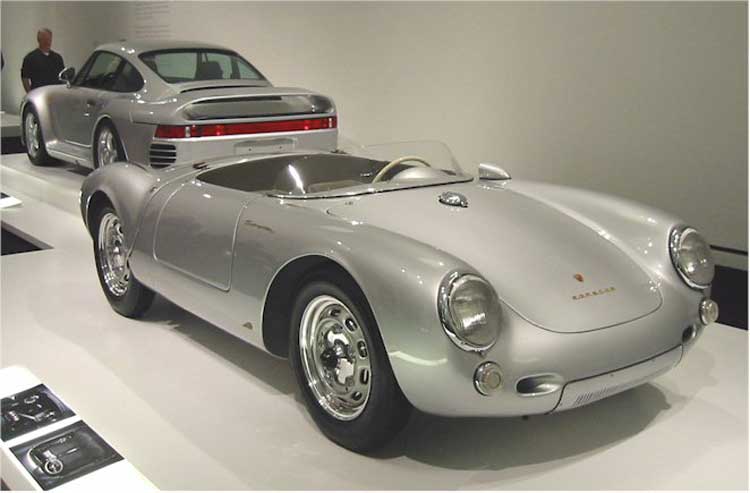 The Porsche 550 Spyder 1955 was small and silver. The car weighed 1,500 pounds. The 1.5 liter 110hp car was known for its complexity. Only 90 of the 5550 Spyders were ever built. That’s quite a number as most of its competitors ran single digit productions. The four-cam flat four vehicle was designed by Ernst Fuhrmann. It was one of the proudest Ralph Lauren’s cars.

The Jaguar XKSS 1957 was a D-Type vehicle, complete with taillights, windshields, passenger seats and everything else. The world went nuts when the vehicle was launched at the New York automobile show. Only 16 of these cars rolled out because of a major fire at the company’s workshop. All of them exist to this date. The car, introduced after Jaguar quit motorsports, had its fans though. 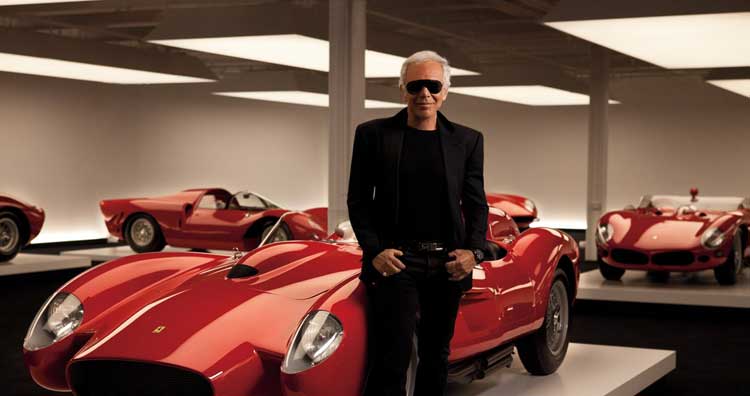 This one Ralph Lauren’s car epitomize the marquee brand’s early 1950s philosophy. It had simple bodywork and chassis and a comparatively large 4.9 liter V12 engine which output 330hp. The bodywork was designed by Pinin Farina. Five cars of the Ferrari 375 Plus series were produced and Ralph Lauren was the fifth owner. The vehicle was an early product in what later came to be known as the Ferrari Pininfarina. 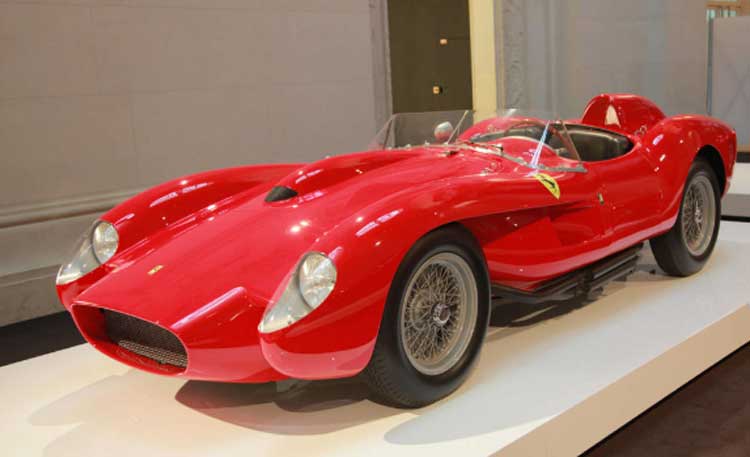 The 250 was a Testa Rossa. It was one of most recognizable Ferrari cars with the fenders looking like torpedoes. The vehicle was manufactured for endurance car racing, particularly 24 Hours of Le Mans. The bodywork was gorgeous and the Ferrari 250 TR was once the Ralph Lauren most expensive car. Even the scrappy ones today are auctioned for millions. Testa Rossa in Italian meant “red head” which refers to the car’s V12 engine valve covers. 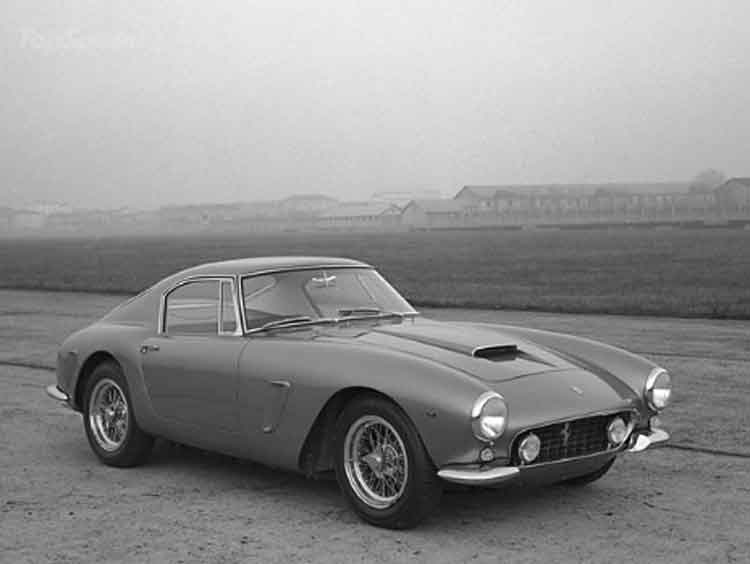 A Tour de France vehicle, Ferrari 250 GT SWB was also known as the “Long Wheelbase Berlinetta” for obvious reasons. Only 70 models of the car were built. Based on a Pinin Farina design, production handled by Carrozzeria Scagiletti. The car had a 240hp engine and went up to 260hp. This was the second Ferrari in Ralph Lauren’s car kitty. 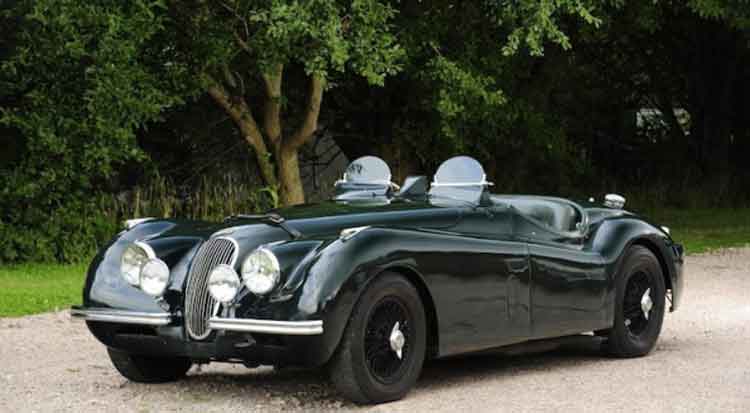 The Jaguar XK 120 Roadster in Ralph Lauren car collection has a custom color created by the legendary designer himself, and he has five of it. The car was launched just after World War II. People loved the new XK 120 Roadster. The vehicle was a celebrity among celebrities. Top Hollywood stars like Clark Gable and Humphrey Bogart had the XK 120 Roadster in their driveway. It has since been known as a quintessential British car. 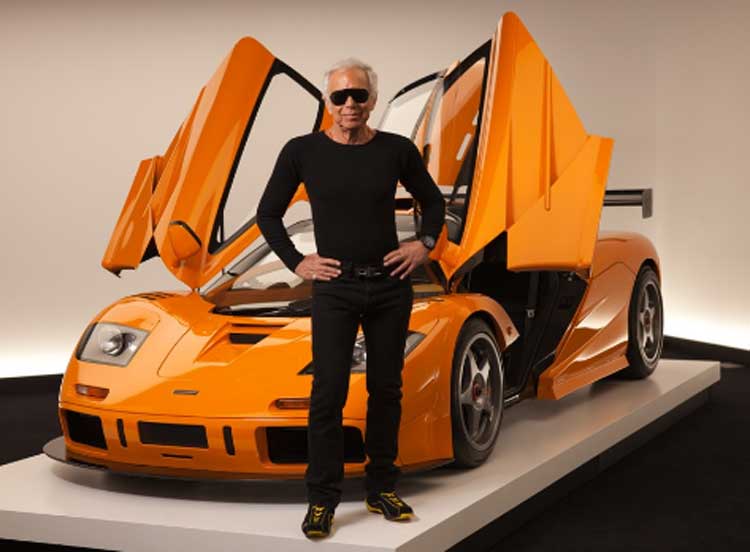 The McLaren F1 Le Mans is special among Ralph Lauren cars. Only five models of this extremely rare car were ever built and all were high in demand by automobile collectors. All cars had the distinctive Papaya Orange color, which the company’s founder Bruce McLaren painted on his race cars. The cars were fitted with a 691hp engine that had 562 lb-ft of torque. Among all Ralph Lauren cars, this one is his personal favorite. 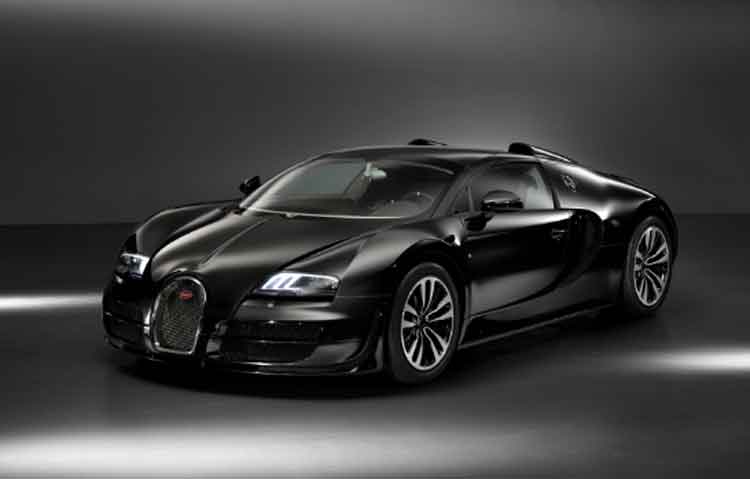 Priced at $2.9 million, the Bugatti Veyron Grand Sport Vitesse is extremely popular among celebrities. The aerodynamic package comes with an 8.0 liter W16 engine that outputs 1200hp. The brute power reaches the car from 0-100mph in 2.5 seconds. The Grand Sport Vitesse is a roadster version of the Veyron Super Sport. It’s one of the most expensive cars of its kind in the world. 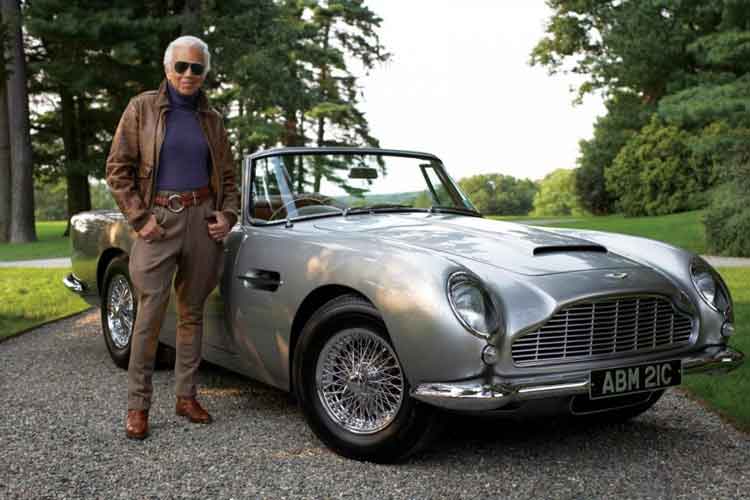 The Aston Martin DB5 Volante is considered by many to be the most beautiful car ever manufactured by the British company. It was the James Bond car in the films Goldfinger and Thunderball. Packed with a 3995 DOHC Straight engine, the vehicle has a top speed of 142mph. Back in the mid-sixties, the car was priced $5,800. Today, the DB5 Volante is one of the priciest cars to be auctioned. 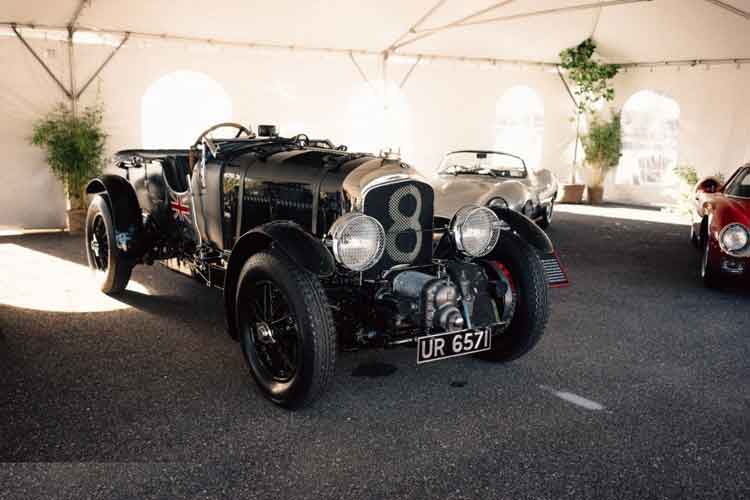 The Bentley Birkin Blower has proved wrong that a lesser number of cylinders can’t make a vehicle powerful. The car is fitted with a 6.5 liter engine which outputs 175hp at 3,500rpm. The racing model produces 242hp at 2,400rpm. The racing version of the Bentley Birkin Blower was manufactured for 24 Hours race of Le Mans. The 1929 car was auctioned at Sussex some years back at around $7.9 million. 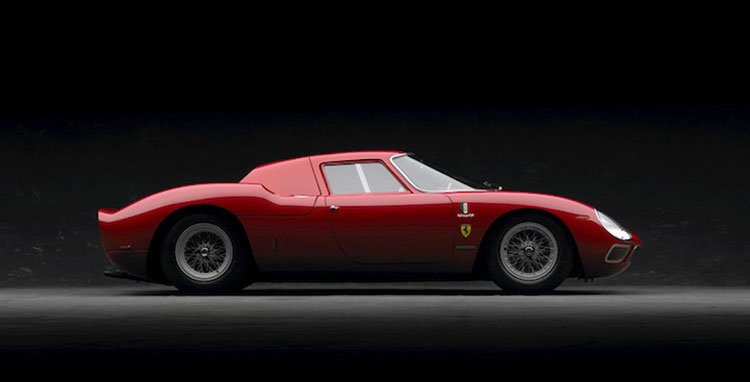 It’s the world’s ninth most expensive Ferrari car. The last one was sold at $17.6 million in 2015. The 250 LM is a member of the Ferrari P Series and was a sports prototype racing car. The evolution dated back to race-winning model of the 1960s. Only 32 units of 250 LMs were manufactured, each being powered by a 3.3 liter V6 engine. LM stands for Le Mans because Masten Gregory and Jochen Rindt won the 1965 race with this car. 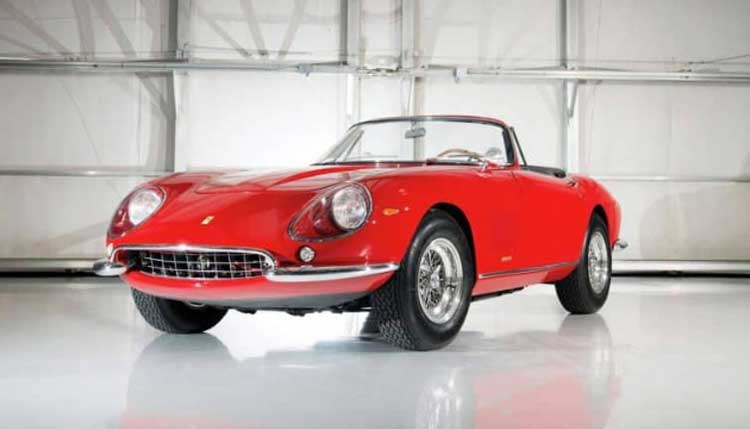 This was the fourth most expensive car from the Italian automaker which was ever sold. It represents the 275 four-cam type. Only 10 pieces of the vehicle were manufactured. One of these were sold in California in 2013 for $27.5 million. Ralph Lauren’s car, however, is still owned by the legendary designer. The original model of the car was actually a coupe. The 275 NART Spyder was especially made for the US market. 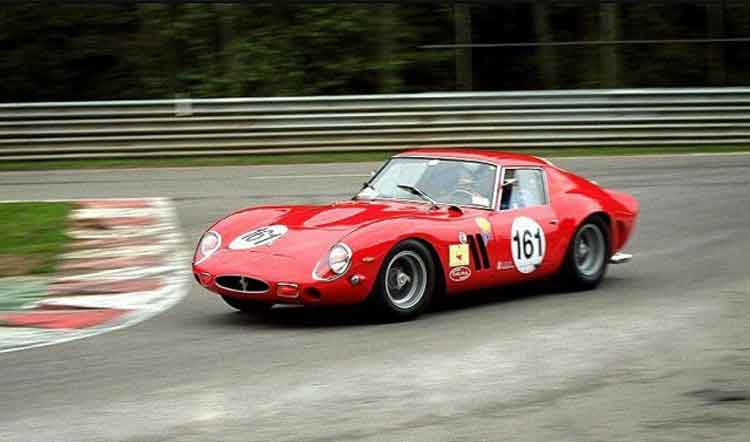 In the entire range of Ralph Lauren cars, the Ferrari 250 GTO was perhaps the most expensive. The Italian automaker manufactured only 39 units of this car. One of them was auctioned at Bonhams, California, some years back at $38 million. The original retail price of the car in 1962 was $18,000. It was driven by Ferrari legends like Henri Oreiller, Jo Schlesser, Paolo Colombo, Fabrizio Violati, and Ernesto Prinoth. 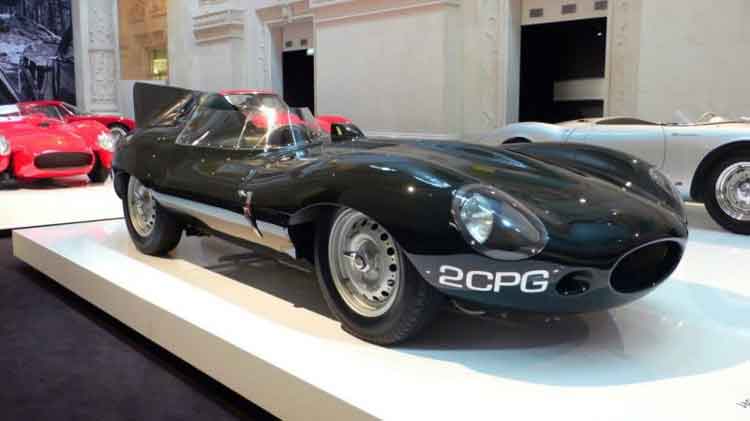 The Jaguar XKD was produced from 1954 to 1957 and shares the basic Straight Six engine and several technical components with the C-Type. The structure of the car was influenced by aviation industry ergonomics and was radically different from the cars made back then. The car had superb looks and had an innovative monocoque construction. It was a limited edition car owned by Ralph Lauren and other celebrities. 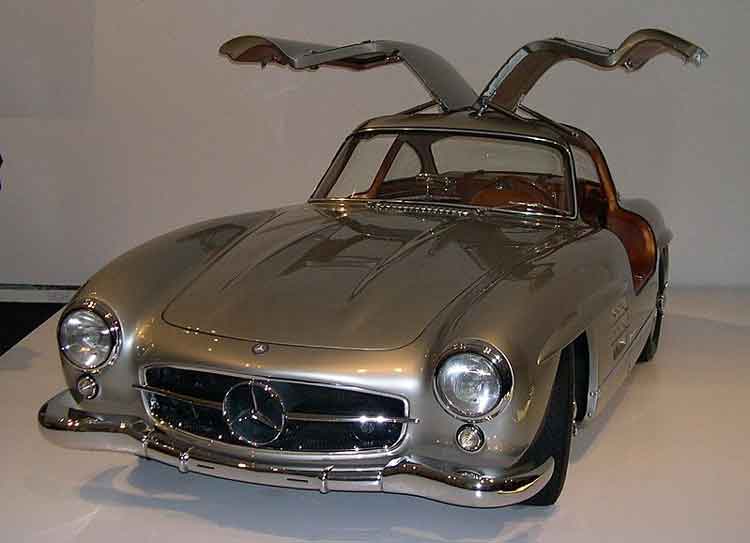 The components of the 1955 Mercedes-Benz 300 SL Papillon were borrowed from its own 300 luxury sedans. The car had a 3.0 liter engine fitted to a SL direct fuel injection system. The design was tilted to the side to forge a lower front profile. The car won hearts of many top celebrities and Ralph Lauren was one of them. The components of the chassis were also inherited from the 300. 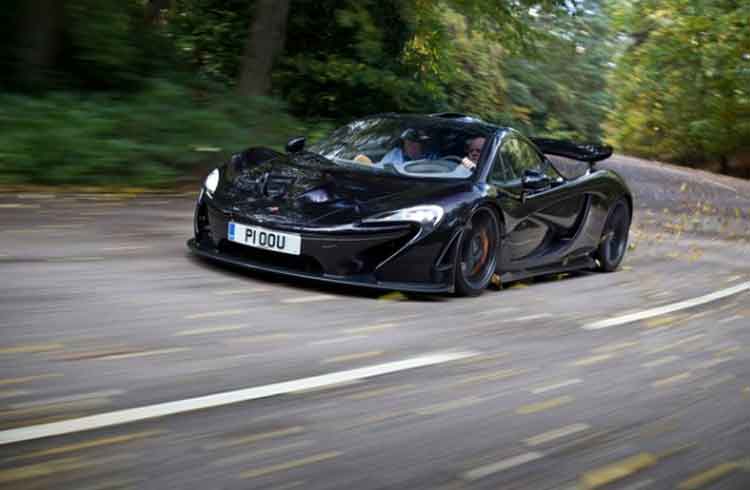 This is a one of the modern Ralph Lauren’s cars. He said that he loves the technology used in the vehicle. The 2015 McLaren P1 was launched at the 2012 Paris Motor Show. Production was limited to 375 models. It was the successor of the original McLaren F1. Both cars can reach a top speed of 218mph. The 2015 version is a super-hybrid with a 1000hp engine. 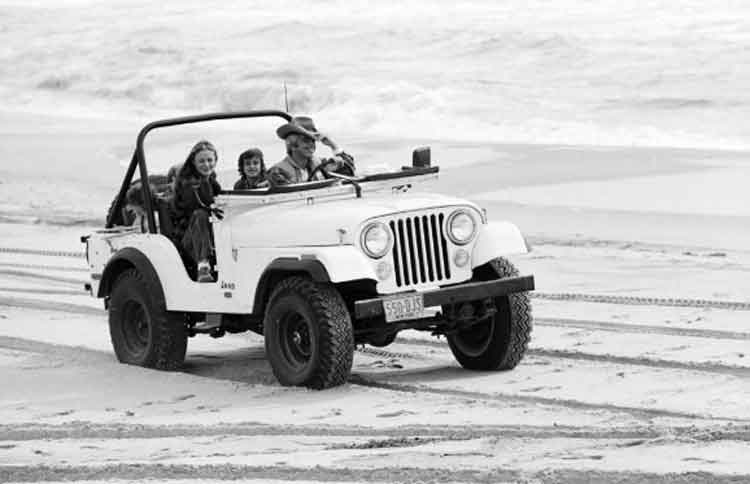 The iconic Willys MB, or the Willys jeep, is an unlikely addition to the Ralph Lauren car collection. It was a super-sturdy vehicle that made its mark during World War II. Ralph Lauren bought the open-hood car in 1951. The 4×4 vehicle also doubled up as a pickup truck. The Willys MB was a high tactical vehicle and sported many improved features from its predecessor, including bottom-mounted wipers, one-piece windshield and a hitch for towing.

Ralph Lauren cars are some of the most awe-inspiring vehicles around. Most of them are select-variants of super luxury cars. From his choices it seems he’s not much a fan of SUVs and rather prefers luxurious sedans.