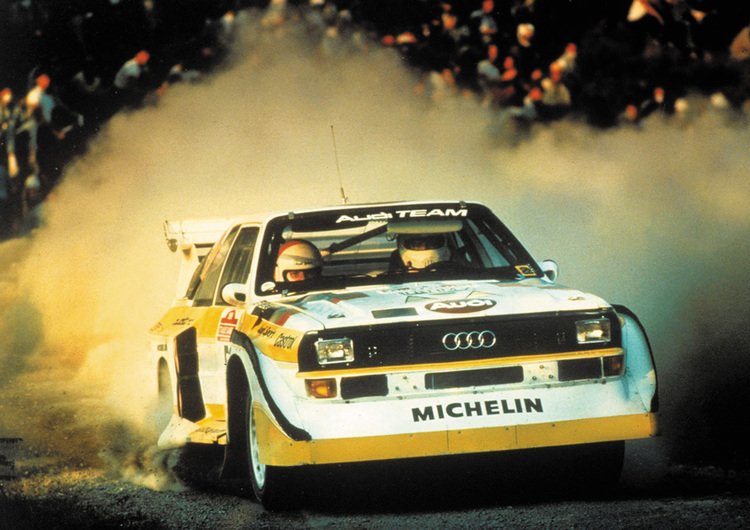 Rally racing is a thrilling motorsport with such extremeness that it’s difficult to pin-point what makes it so. Is it the sport’s format itself- modified versions of road legal cars racing on risky terrain in extreme weather conditions? Or the lunatics who voluntarily participate by driving the best rally cars in this suicidal race, or even the maniac fans who line up dangerously close to the tracks despite the bloody history of this sport.

Well it is the concoction of all these qualities that make rallying so much exciting to watch, but the iconic rally cars are the ones that really steal the show. Since the beginning of rallying, fans have been enchanted by the sheer beauty and raw power of these machines. Moreover, you can actually buy some of these cars, which adds to the excitement. Let’s check out 15 of the greatest rally cars ever made. 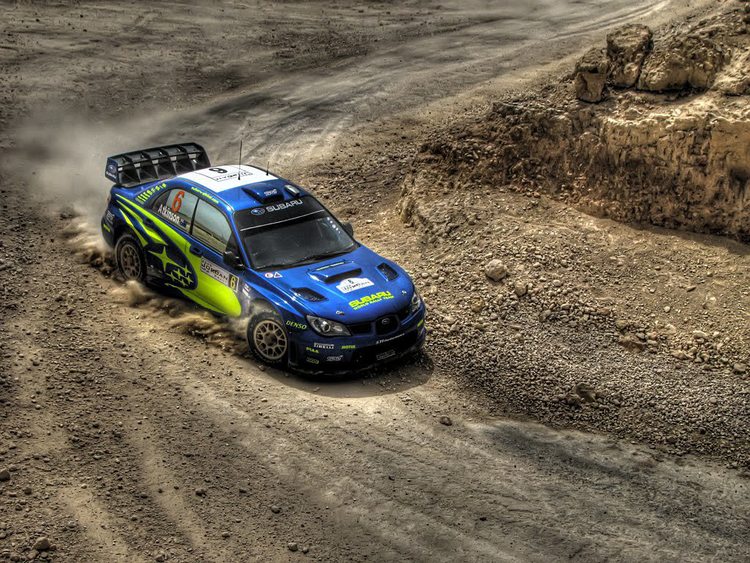 Try making a mental picture of the typical 90’s rally scene & the first thing that comes to mind is a blue car with 555 written across it in yellow, grappling with the tracks. Subaru Impreza finished second on its debut in the 1993 1000 Lakes rally & then never looked back. Driven by legends like Colin McRae, Richard Burns & Peter Solberg, the Impreza gave immortal glory to Subaru with 46 WRC wins, 3 manufacturer’s titles and 3 driver’s titles before Subaru opted out of the competition in 2008. The cult status of Impreza translated into good sales of its road going cousin Impreza WRX. 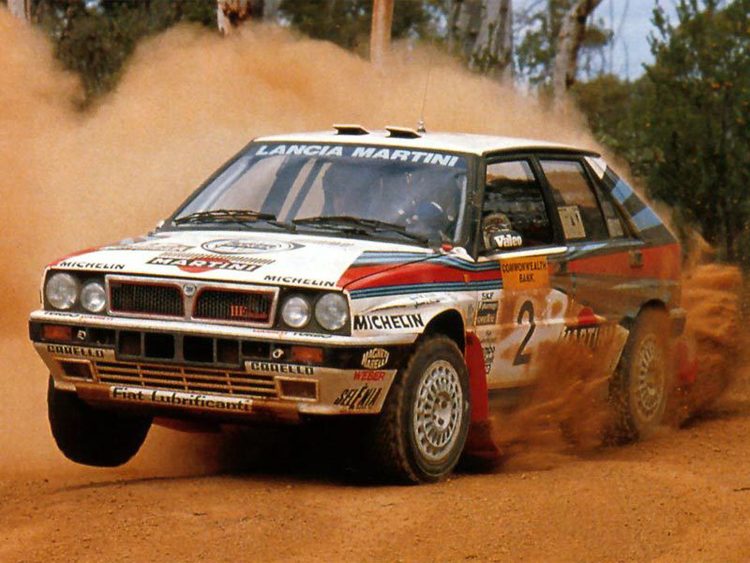 Christened “The Queen of the Rally”, Lancia Delta is unarguably the greatest rally car ever. It was made specifically for Group-A type of rally car racing, which became the standard after Group-B was banned. Lancia became the most successful manufacturer in WRC history with 46 overall wins and record 6 consecutive manufacturer’s title from 1987 to 1992; all thanks to this car. The Delta series spawned with HF-4WD, succeeded by Delta Integrale 8V, Integrale 16V & Integrale Evoluzione, and then retired in 1994. 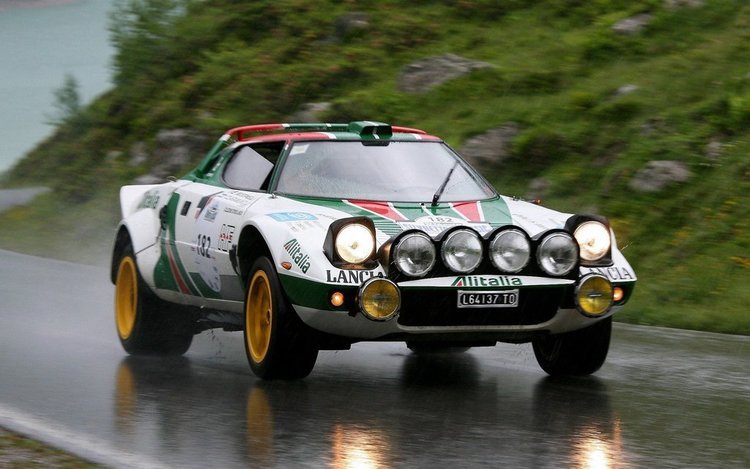 Stratos was conceived to be a rally car only and 500 units were produced just to abide by the homologation rules. It was designed and manufactured by Bertone in Turin, while the final assembly took place at Lancia’s Chivarro plant.

It was a fierce competitor on the tracks, but Fiat’s internal politics favored the 131 Abarth for its rally responsibilities and we couldn’t see much of this beauty. Rather unfortunate for its die-hard fans!

Audi revolutionized rally racing with the turbocharged and four-wheel drive (4WD) Quattro. It forced other marquees to rethink their designs and became a prototype for many future cars, making it one of the best rally cars of all time. Audi Quattro evolved from A1, A2 to Sport S1 & Sport S1 E2 and dominated it’s era with 23 wins, 2 manufacturer’s titles and 2 driver’s titles from 1981-1987. Quattro S1 was one of the most powerful group-B cars with a 5-cylinder engine cranking 450PS and could accelerate to 100kmph in just 3.1 seconds. With Group-B coming to an end after a few tragic mishaps, the hyper-powered cars including Quattro became disqualified. Still, it demonstrated to the world that 4WD type of rally cars are the key to high performance on rally tracks, all thanks to this legend. 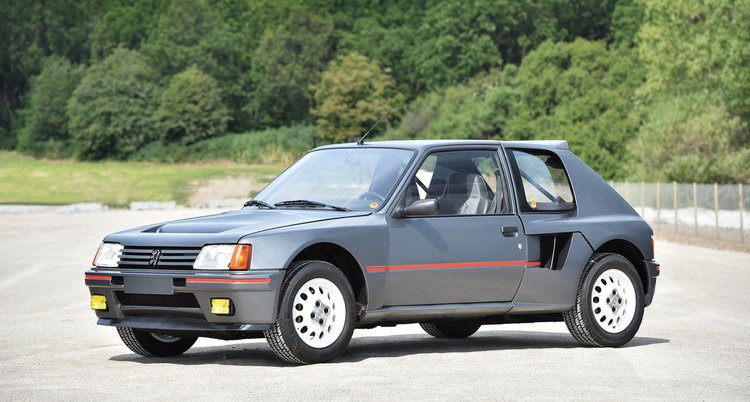 The 205 T16 (Turbocharged, 16 valves) was a champion car that emerged during the Group-B competition, often (& aptly) called the golden era of rallying. It was the designer’s dream with the best of all worlds – 4WD of Audi Quattro, Turbocharger, Epicyclic gear train, rear engine, light-weight (900 KG only) and much more. Peugeot 205 T16 ended its streak with 16 WRC wins and 2+2 titles before Group-B was banned. After that, its modified version went on to win the Paris Dakar Rally and Pikes Peak Rally too. 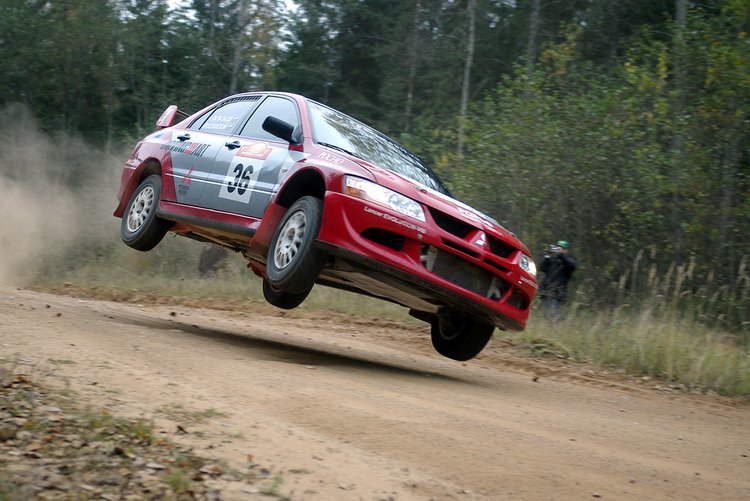 Lancer Evo became synonymous with rally racing due to its domination from 1993-2003 with 27 wins, 1 manufacturer’s title and 4 driver’s titles, earning it a spot as one of the best rally cars of all time. Its recipe for success was ingrained in the turbocharged 2.0 litre engine and a 4WD system.
Finnish legend Tommi Makkinen clinched the driver’s title for a record 4 consecutive years from 1996-99 commanding the agile and dynamic Lancer Evo. 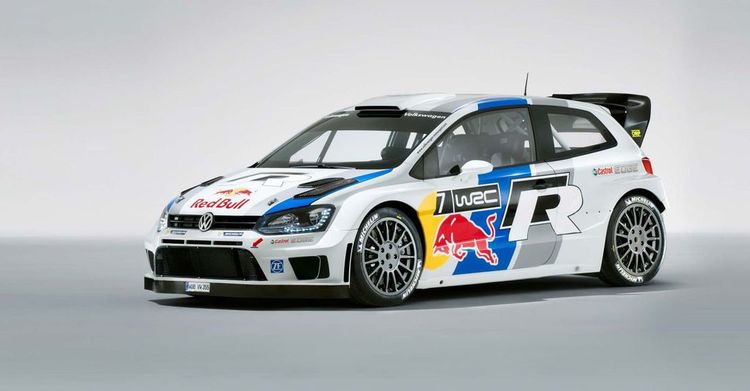 4 seasons, 53 rallies, 43 victories (81% success rate). This unmatched feat makes VW Polo a modern legend. Debuting in 2013, it was Volkswagen’s first successful rally car. Its 1.6 litre turbo-engine produced 320 hp of power and 323 lb-ft of torque enabling Polo R WRC to accelerate to 100 kmph in 3.9 seconds. VW Motorsports withdrew from the WRC in 2016, surprising everyone as well as preventing history to be rewritten at the hands of Polo. 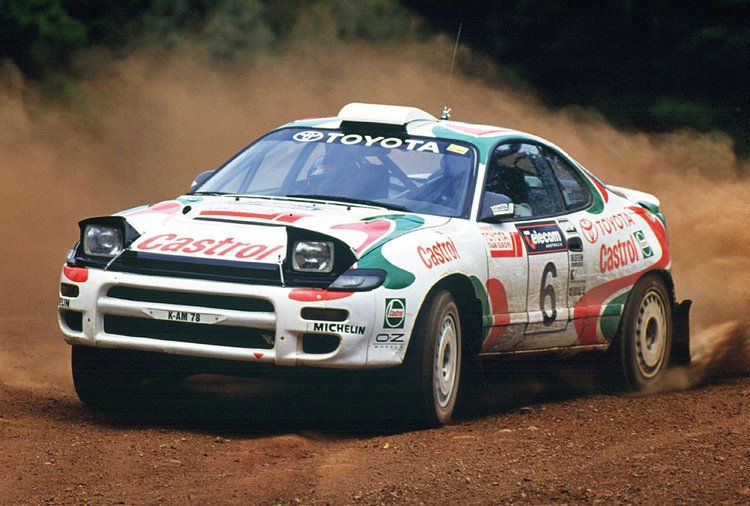 The Japanese Toyota Celica was a top rally car and earned its name in rally history for two reasons. Ending the European manufacturer’s domination in WRC and introducing the anti-lag system (ALS) which was later adopted by other teams too. It developed a fierce rivalry with Lancia Delta, and eventually climbed to the top of the then rally scene after Delta’s exit, with 30 wins from 1988-96. 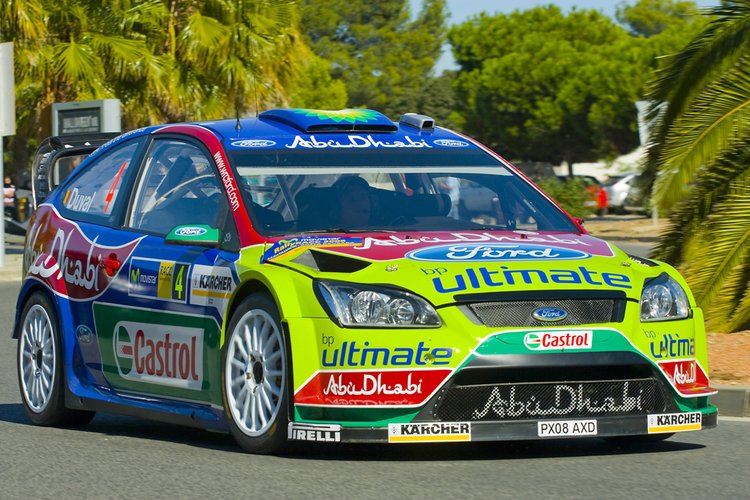 If Escort brought home glory for Ford, Focus RS WRC multiplied it several times. Starting with its maiden win in debut year (1999), Focus finished with 44 WRC wins and 2 manufacturer’s titles by 2010 in the hands of rally legend Colin McRae. Focus is known for its robustness. It would finish the race even after flipping and somersaulting multiple times, best seen in the Rally of Argentina spectacle. 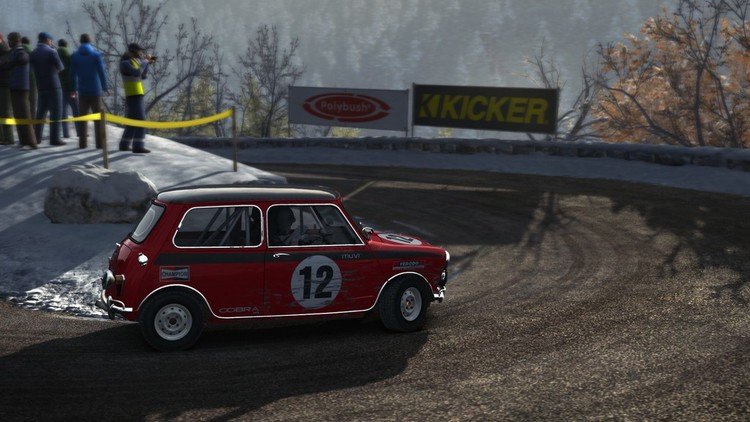 Mini, despite its name and size, was quite big on performance! It was the first small car with front-wheel drive and a transverse mounted engine. These qualities made it light & agile. It comprehensively beat the more advanced, expensive and even the then best rally cars in its road handling abilities. Mini Cooper went on to win the Monte Carlo rally three times in 1964, 65 and 67.

Also Read: Benefits of Car Waxing and Steps to do it

Despite being a relatively modern rally car, Citroen C4 is still considered one of the top rally cars. Winning on its debut at 2007 WRC Rally Monte-Carlo, it achieved a formidable feat of 36 wins in just 4 seasons from 2007-10 with 3 manufacturer’s titles in a row and a driver’s title in each of the 4 seasons. It also has a 100% win record on 13 pure asphalt rounds at WRC. 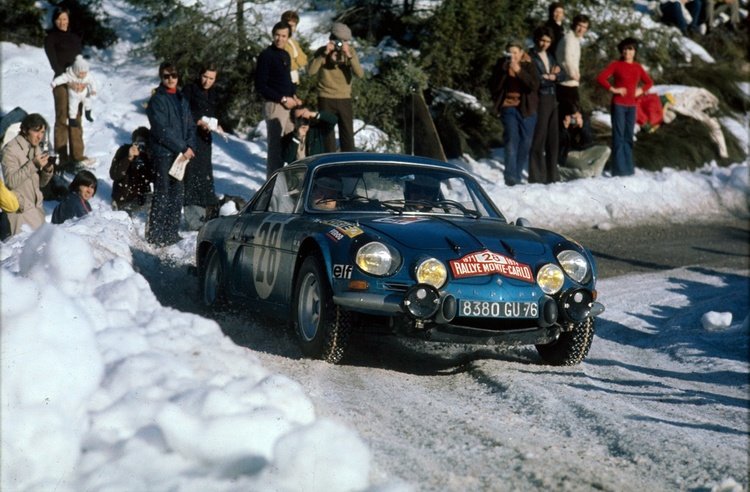 This tiny car with extremely light-weight of 620 kg (1,370 lb) and top speed of 130 mph has its name carved in golden letters as the winner of first marquee title winner of WRC. Although Renault-Alpine A110 swept 6 wins in 1973, the inaugural year of WRC, its reign was ephemeral and it became obsolete by cars like the Lancia Stratos. 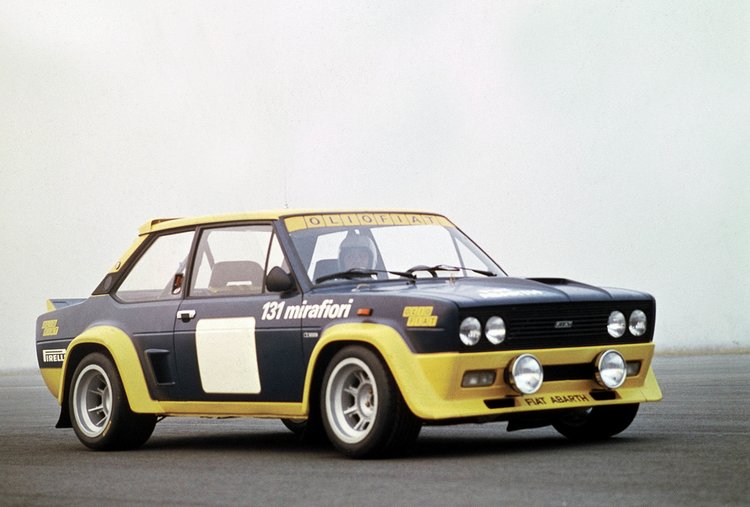 The transformation of Fiat 131 from a meek house-hold Italian car to the ruthless rally monster 131 Abarth is what makes rally cars so exciting. It was a champion car with 20 wins in its tally including the manufacturer’s title in 1977, 78 and 80. However, being a rear wheel drive car it became obsolete after Audi introduced the Quattro 4WD and Fiat retreated to the design board. 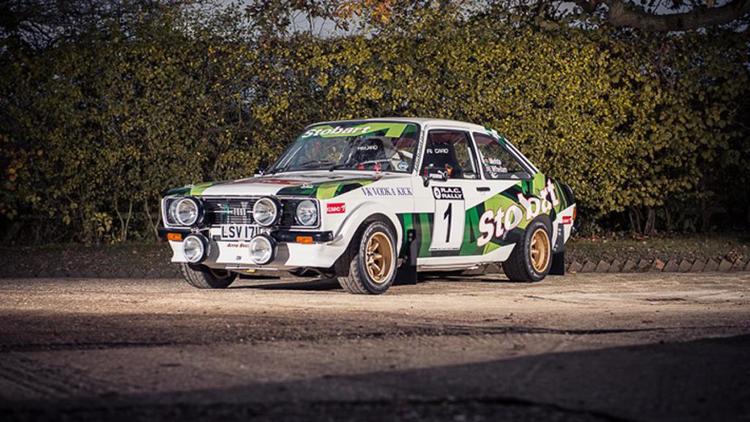 The Ford Escort series thrilled rally fans for more than 30 years with its muscular looks and raw power, which led to 36 wins and 3 titles from 1968-98. It was the Escort RS1800 that earned Ford maximum wins (17) as compared to RS1600, RS Cosworth and Escort WRC. It was Ford’s first classic rally car and brought much fame to it. 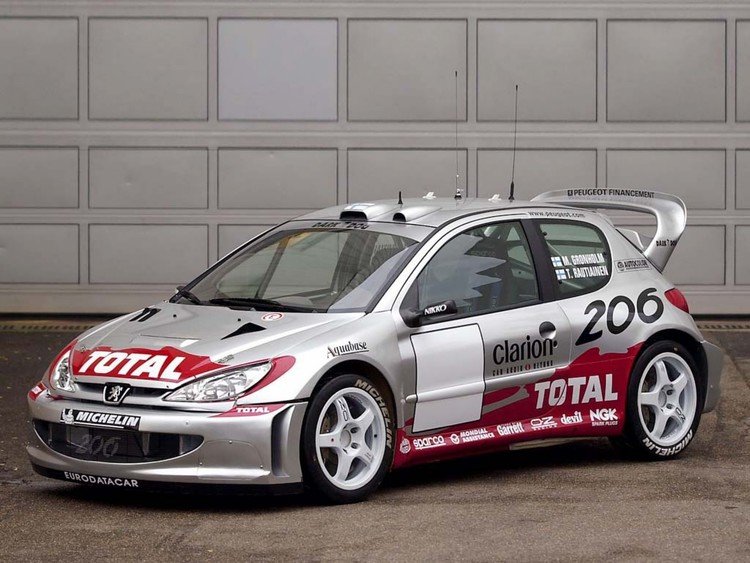 The 206WRC was a worthy successor to the epic Group-B Peugeot 205 T16. This miniscule car was packed with 300 hp, 390 lb-ft of sheer power combined with a 4WD and regained the lost glory for Peugeot with 24 WRC titles from 1997-2003. The updated WRC is expected to make its entry in the coming rallies and the French maker is eying to grab some more accolades soon.

Well, it was tough choosing just 15 best rally cars out of the plethora of glorious machines that rally racing has provided us over several decades. Few others that deserve a mention are: Lancia Rally 037, the compact beast Renault 5 Turbo and the Ferrari 288 GTO which was unfortunately late for its debut and never made it to the tracks. The ones that we have missed can be highlighted in the comment section while also let us know your pick from our selection lot.