The glory of the hunter lies mainly in the adventure of the chase and not in the ultimate capture! While safety is one thing that is always on the mind, cops often need capable, speedy cars to combat crime. There were times when the American police cars were equipped with a simple driving mechanism and a siren above to chase the thieves. But things have evolved, and vehicles have been tweaked for impeccable performance, speed, and electrifying power so that cops can outrun the reckless speedsters with ease.

Some coolest police cars in America have gained reputation because of their unique features and exceptional performance. So, if you want to check everything about these cars, then here we present you the list of 18 coolest American police cars that will definitely speed up your senses. 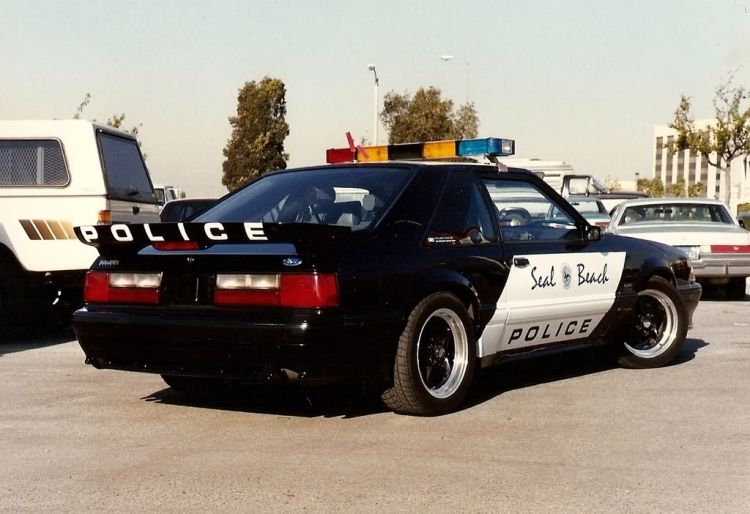 Belonging to the special service package category, this car was introduced to serve the American law enforcement institutions from 1982 to 1993. With the primary aim to deliver speedy operations to the law enforcement in comparison to the hefty sedans used by the cops at that time, this car holds look and functionality almost equivalent to a high-end sports car. Powered by Ford’s 5.0 V8 engine, the vehicle was available with an option of five-speed and four-speed manual transmissions. 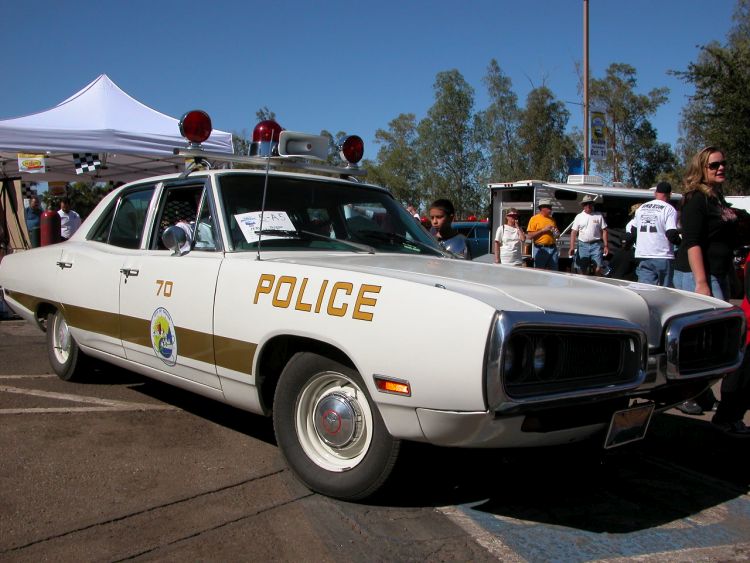 Popularly known as the 1970 Dodge Coronet, this is one of the most spectacular American police cars with an impressive iconic appearance and performance. Dodge is a renowned manufacturer for offering the American law enforcement with numerous exceptionally crafted police vehicles. This model from Dodge featured an enthralling Magnum 440, a powerful headlight, and grille. Its masculine design and unmatched speed were enough to chase down any criminal. 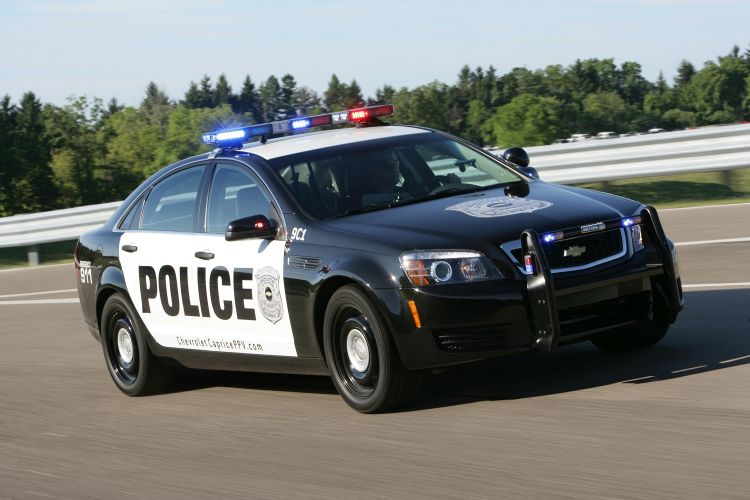 The Chevrolet Caprice was introduced in the category of Police Patrol Vehicle in 2009. Presented by General Motors, the earlier version of this car has already served the American law enforcement for the duration of 1991 – 1996. With 11.8 inches wheelbase dimensions, this car holds a sophisticated and elegant design and an exclusive front-seat view crafted specifically for the police use. Chevrolet Caprice is one of the finest United States police cars equipped with various upgrades, like auxiliary coolers for the engine oil, high-output alternator, transmission fluid, 18-inch wheels, 4-wheel disc brakes, advanced stability control, and a power steering. It was available in the standard 3.6 L V6 engine as well as 6.0 L V8 engine models. 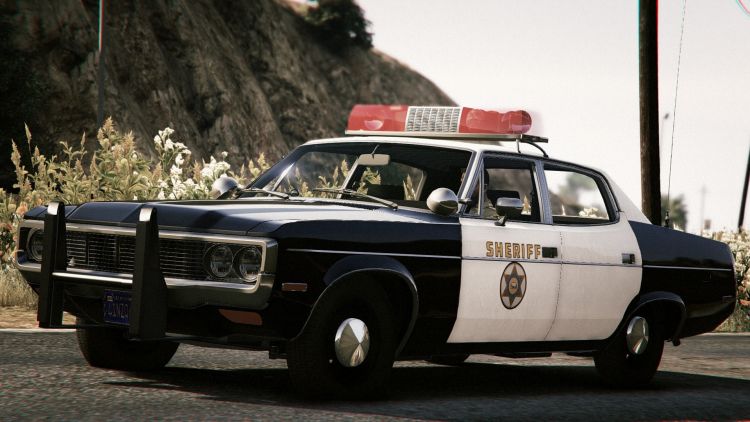 AMC employed their 1971 Matador Sedan as a vehicle to American police. In 1972, AMC re-announced the matador with few competitive changes including 10W straight weight transmission engine oil. The 401 V8 engine was outlined with silicone valves, heavy duty springs, and powerful oil seals. It incorporated a 62 amp alternator, Federal siren, Motorola 5 channel Motrac 70 radio. With a 401ci V8 engine it offered smooth transition and high speed that made it one of the best American police cars till date. Even AMC Matador was rewarded with highest sales to Alabama and Georgia in 1972 with almost 286 cars sold in a year. 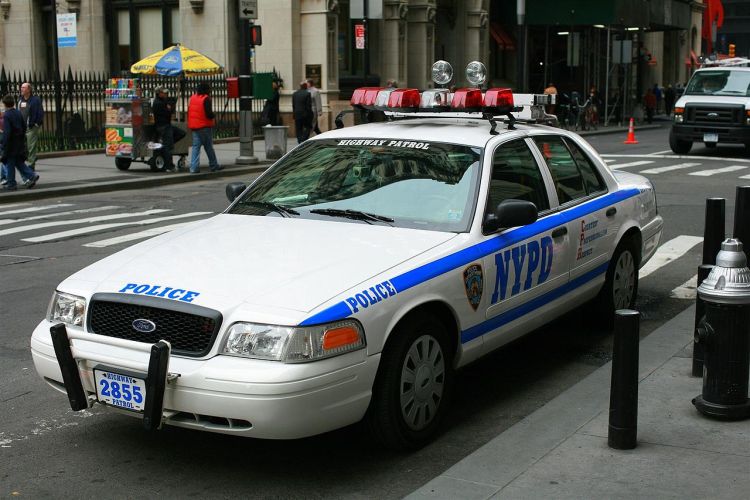 This high-powered four-door sedan from Ford came into the law enforcement from 1992 to 2011. Ford Crown was one of the most ubiquitous cars in the United States and Canada in the era when it was introduced. With a body-on-frame construction, it enables convenient repairs after an accident. This version from Ford was incorporated with an upgraded version of 4.6 liters, V8 engine, a 200 amp alternator, a powerful battery, and robust shock absorbers. In 2005, Ford even added the optional fire suppression system to this version. 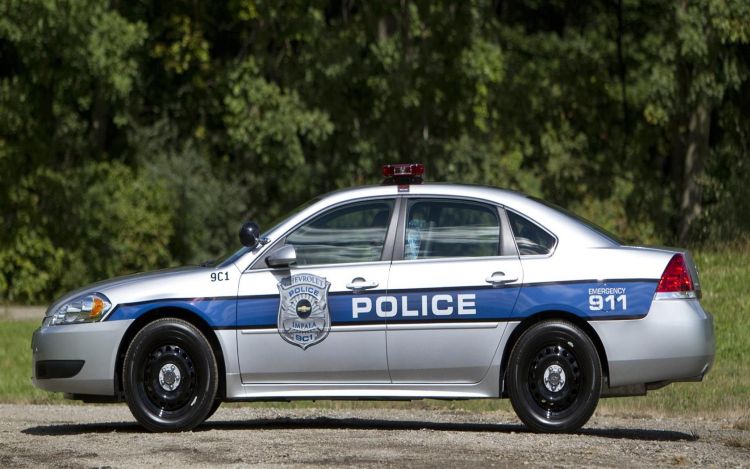 The Chevrolet Impala is one of the coolest police cars in America powered by the 3.6-liter V6 engine. With front cloth bucket seats and enough space between two seats for equipment, it offers 6-way power adjustment for both the seats. The car is equipped with exceptional features like power steering control, remote keyless entry, secondary driver controls, power windows, cruise control, and door locks. The company offered this vehicle in three different versions of LS, LTZ, and LT. This model is popular among the police enforcements in New York, Jacksonville, and other high-end cities of America. 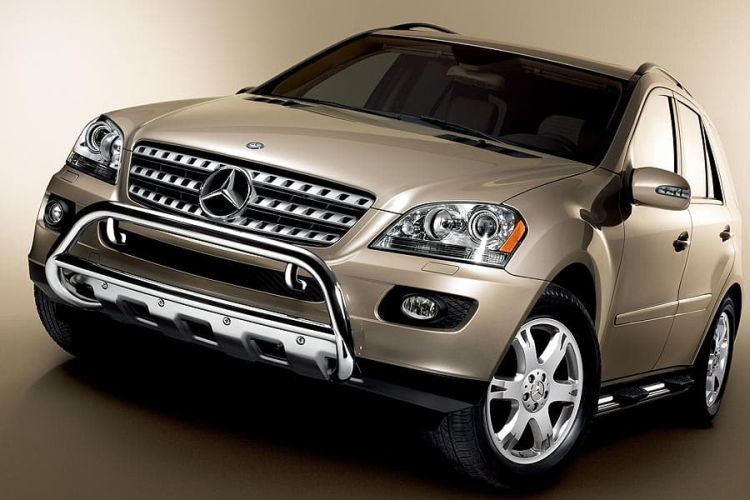 The M-Class SUV from Mercedes was manufactured in Alabama and was one of the first premium SUV. The M-Class was a fine upgrade of the previous models, equipped with powerful ante features. The first-generation M-Class was announced in 1998 powered by a 3.2-liter V6 engine offering 215hp. An improved version then came into existence in 2000 with modifications in the interior system and an optional 3-row seating. In 2001 there was another model introduced with an additional feature of emergency calls. The ML500 model introduced in 2007 was incorporated by a 5.0-liter V8 engine delivering 302 hp. While the Mercedes Benz-M Class model has always been high on luxury and performance, the other thing that was above others in the competition was its price. 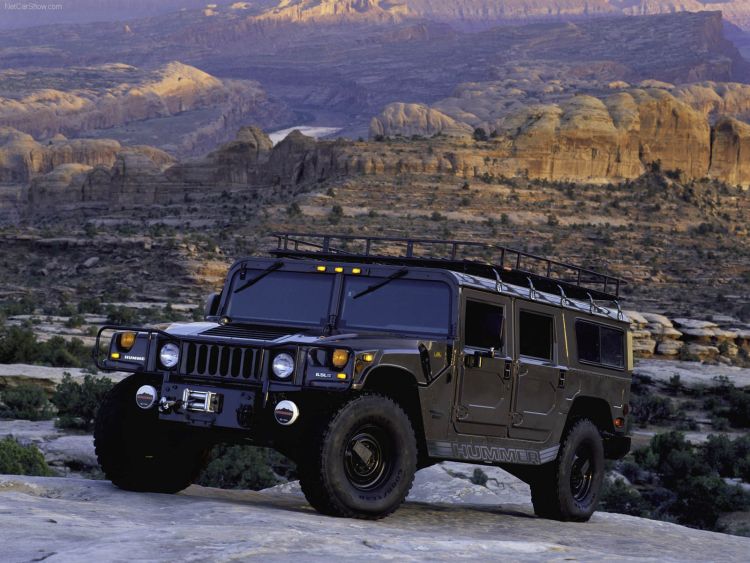 The Hummer H1 was introduced as the part of the law enforcement in 1992. This is not a police sports cars but a hefty version powered by a 6.5-liter diesel engine delivering exceptional speed above 100 MPH. This is not a car for domestic police and is primarily the main source for the police at war and emergency operations. With a seating capacity of 4 and equipped with all the components required by the cops, this car is still used by the Rehoboth, Massachusetts police enforcement agency. However, GM is no longer producing it; but still, it holds unmatched looks and high-end efficiency that are enough to serve the needs of the police during specific incidents. 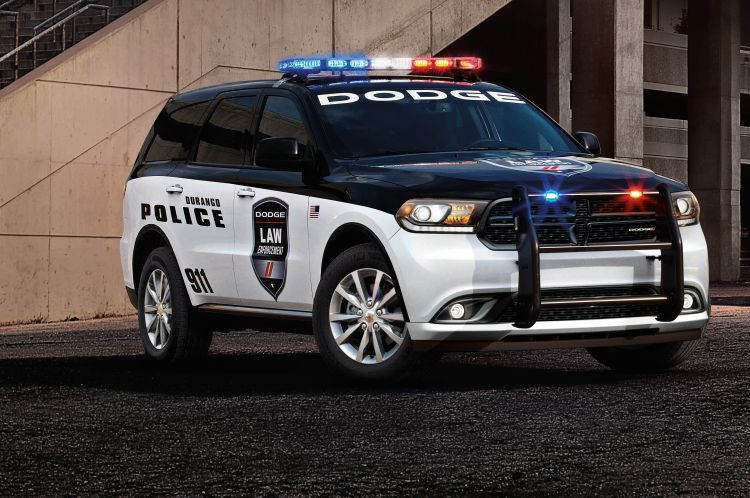 Dodge Durango is one of the premium SUV introduced by Chrysler offering long-lasting performance and durability. It comes in two different variants with a 3.6 liter V-6 Pentastar engine and an upgraded 5.7-liter HEMI V-8 engine delivering 360hp. With heavy-duty elements, this is a powerful car incorporated with bigger brake package, heavy duty battery, larger water pump, engine cooler, and an efficient 220 amp alternator. Its interior comes with additional space for the cargo and an additional storage space in both the side compartments. With a wiring prep and an exclusive service dome lamp, it is one of the premium American police cars with fleet-geared mechanisms, a backup camera, a towing package, and an engine block heater. 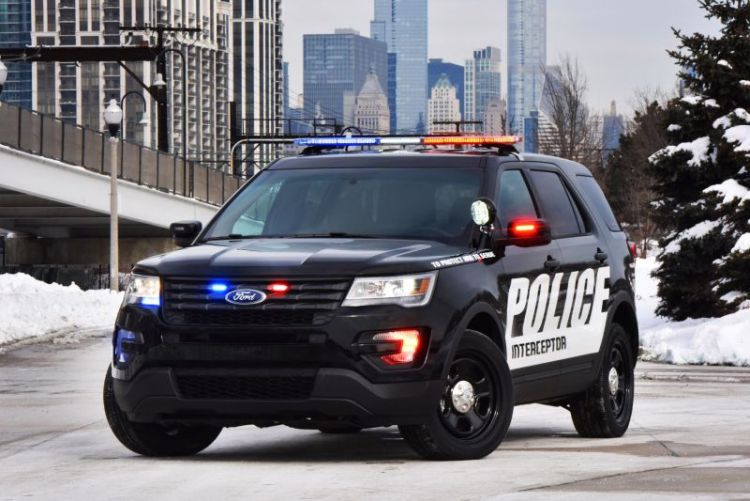 This is one of the most spectacular SUV from Ford till date. This vehicle is introduced only for particular agencies and is available only to law enforcements, EMS agencies, and fire companies. Within the variant announced for the law enforcement, it is powered by a 3.7-liter V-6 engine delivering a horsepower of 365. The exclusive feature of this model is the availability of special provisions for installation of sirens, light bars, equipment, and radios. It even houses a rear camera with a powerful washer mechanism that makes it one of the top police cars in America. The seamless design and a stealthier appearance are well-complemented with the advanced surveillance mode provided at the back. 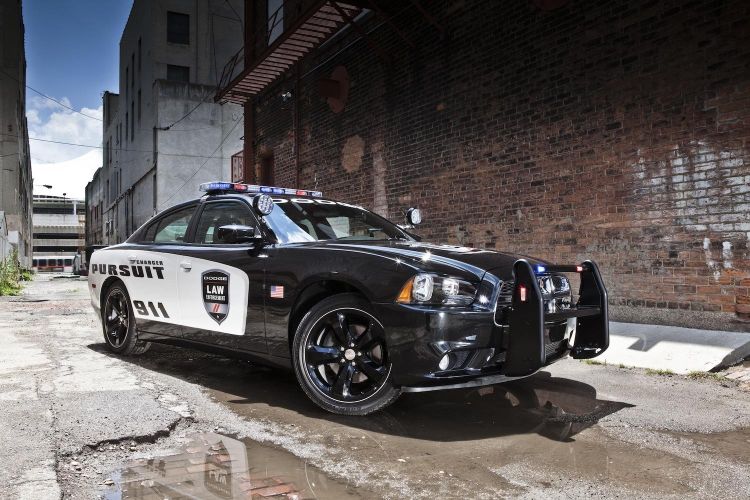 The Dodge Charger is almost similar to the police sports car and gained momentum in America due to its unbeatable speed and immaculate looks. This Hemi V-8, muscular sedan strikes a respectable position in the heart of every cop and fear among the speedy thieves. While the initial version of this car integrated a V-8 engine delivering 340hp and hitting a high speed of 60mph in 6 seconds, there was soon introduced an even more robust version. The new model was based on the same technicalities with the difference of having a more powerful engine and a high performance of 370hp. 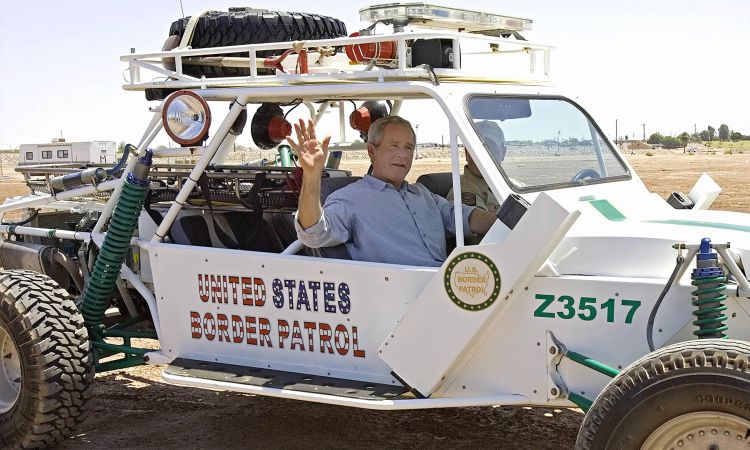 This is one of the extreme American police cars introduced specifically to serve the desert patrolling duty. Besides having a unique and exclusive design, this vehicle is powered with a VW engine housing a capability of 200hp. With a speed rate of up to 80 mph, this is a robust and durable vehicle that can withstand even the extreme climatic conditions. The main aim of designing this car was to add convenience to the border patrolling with Mexico. It can run over the roughest of terrains and reach places where the patrolling SUV’s cannot reach. It is incorporated with numerous auto functionalities and potential components that make it a critical part of the defense system. 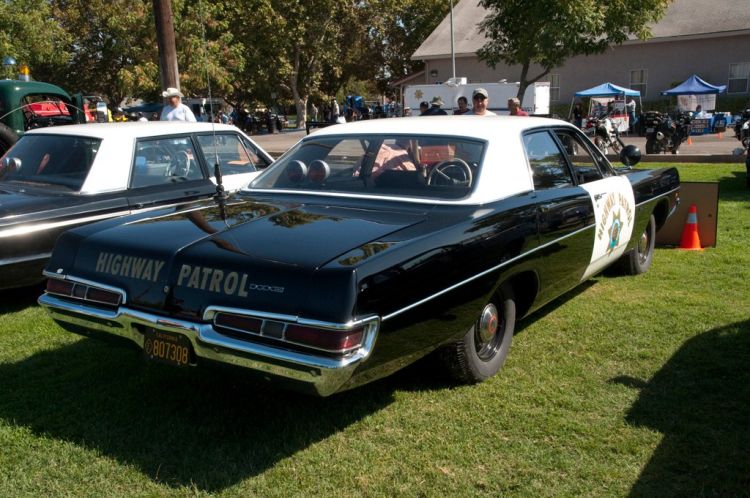 Chrysler mainly owned the market for high-performing cop cars, and in 1969 they introduced the fantastic and robust Dodge Polara. Packed with the 375-hp 440 Magnum, this car was a real beast. It was based on the four-door mechanism and holds the quickest speed as compared to the other versions at that time. It provided a grounded speed of 147 mph, which is a remarkable speed among all the releases. 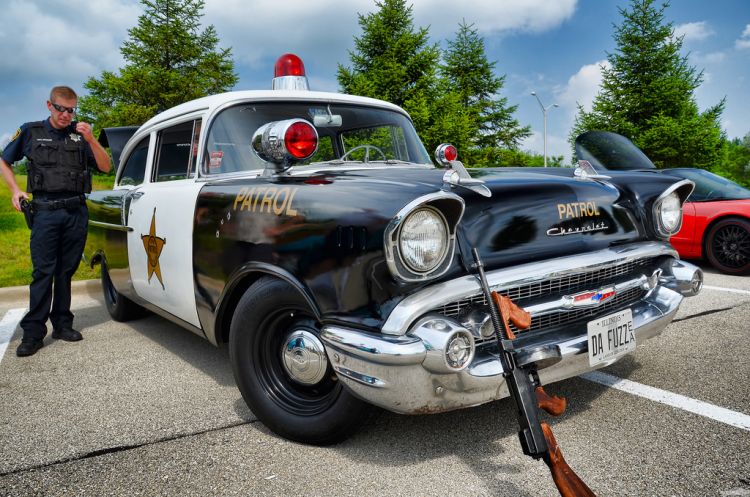 Introduced by Chevrolet in 1950 – 1981, this was a full-size car that holds a unique body shape and excellent performance. It incorporates the entire features essential to serve the law enforcement duty at par. It is one of the timeless American police vehicles that still have very few competitors. 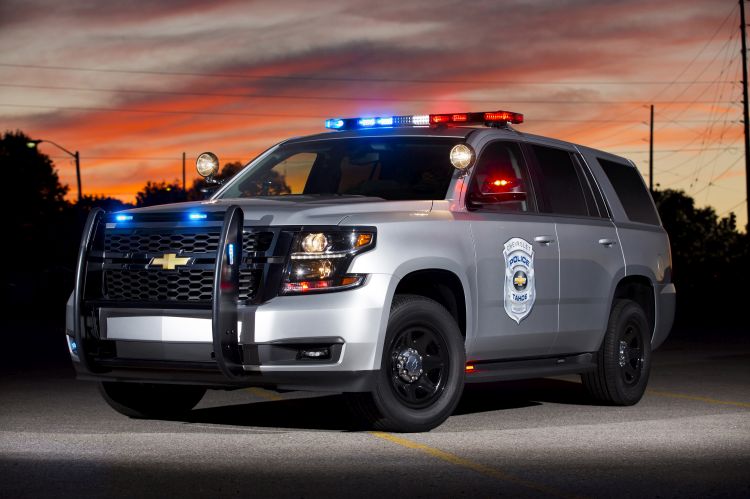 Unmatched in performance, stability, and appearance, the Chevrolet Tahoe Police Pursuit Vehicle is definitely one of the powerful versions till date. It is designed with the four-wheel drive mechanism and a spacious interior room. With a 5.3L V8 engine including Active Fuel Management, excellent valve timing, and 6-speed automatic transmission feature, it is one-of-a-kind vehicle in town. The heavy duty four wheels come with an amazing antilock disc brake mechanism. Also, it contains 170 amp excellent alternator, 730-CCA isolated auxiliary battery system, and a 150 mph guarantee speedometer. With 17 inch aluminum wheels the Chevrolet Tahoe PPV offers high comfort even on uneven roads. 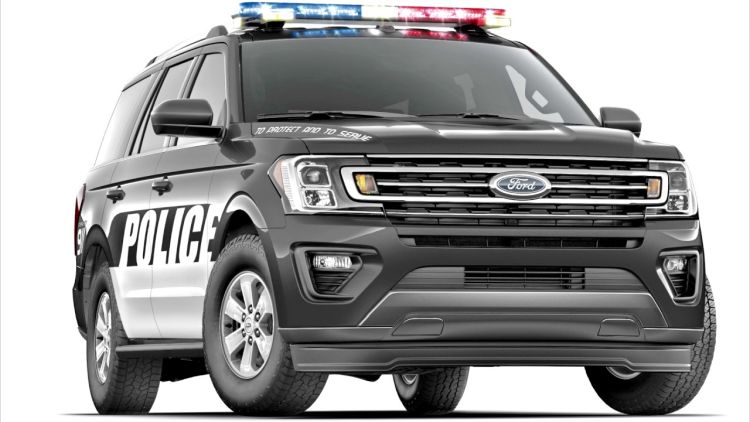 With a bold and impressive exterior styling, the 2017 Ford Expedition SSV comes with exclusive capability, unsurpassed comfort, advanced safety and high-end versatility. It is a perfect vehicle for rigid, tough works and high performance for off-road duty. Besides a 3.5L V6 engine, it comes with big 17″ steel wheels, rear view camera, 3.73 rear axles, column shifter, and a floor console delete. It houses 6-speed automatic transmission mechanism, remote entry system, roof racks, and power driver windows. The car is equipped with all advanced safety norms as needed by the law enforcement to perform effortlessly even under the toughest situations. 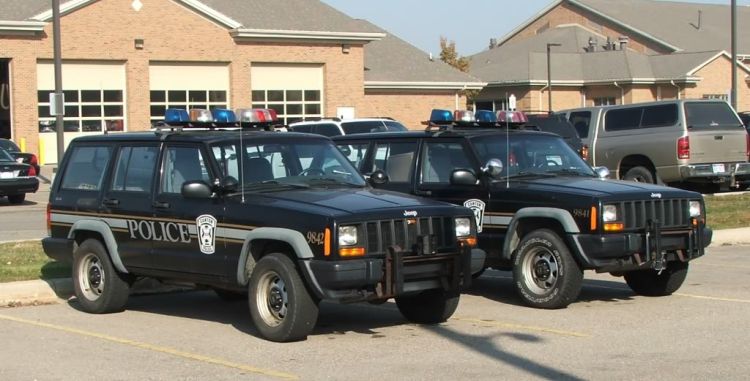 It is one of the most extensively used police cars in America since 1990s. The PPV model of this extraordinary vehicle was introduced in 1992. It was so powerful and versatile that its production remained in high demand till 2001. Even today, it is being used in few parts of the country by the law enforcement groups. The newest model of this vehicle was announced in 2001 that included a powerful engine at 195 HP. The newest version was even equipped with various safety features. One thing unique about this car was its available in three different models, each having different engine size, the Turbo Diesel, 4L AMC 242, and 2.5L AMC 150. 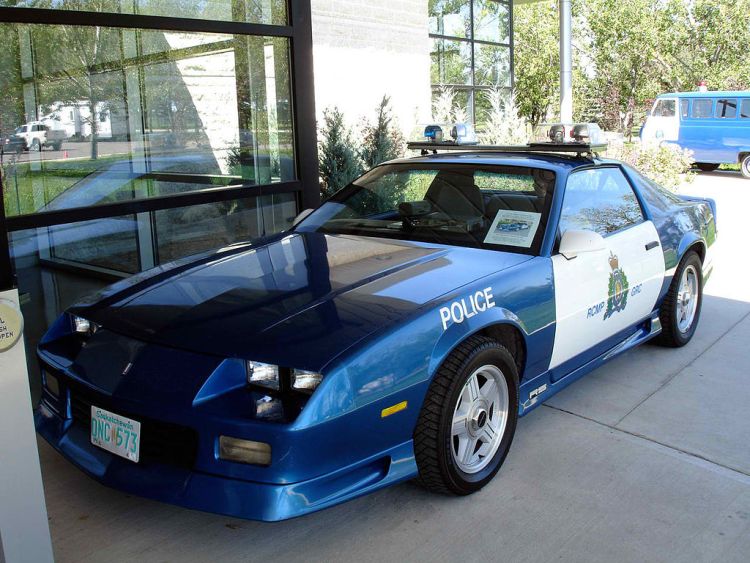 Last but not the least is one of the premium United States police cars, the Chevy Camaro Z28 B4C. Its high performance and elegant appearance were tagged with a Z/28 Camaro title and code name – B4C on the body. Powered by tuned-port injection or TPI 305 and a V-8 engine delivering 350hp, it was a real monster with 6-speed manual transmission and a speed of 60 mph in less than 6 seconds. By 2001, when the 4th generation Camaro was about to set out, this car became an already hot supercar.