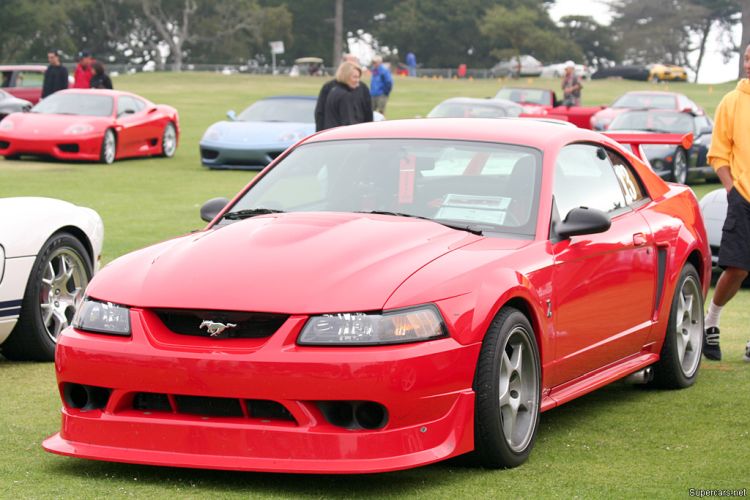 The Mustang is the most respected and widely renowned name in the automobile business. In the year 1064, Ford defined the pony car segment with Mustang and it has been the beating heart of the company ever since.

Here we take a look at the 20 Fastest Mustangs ever made: 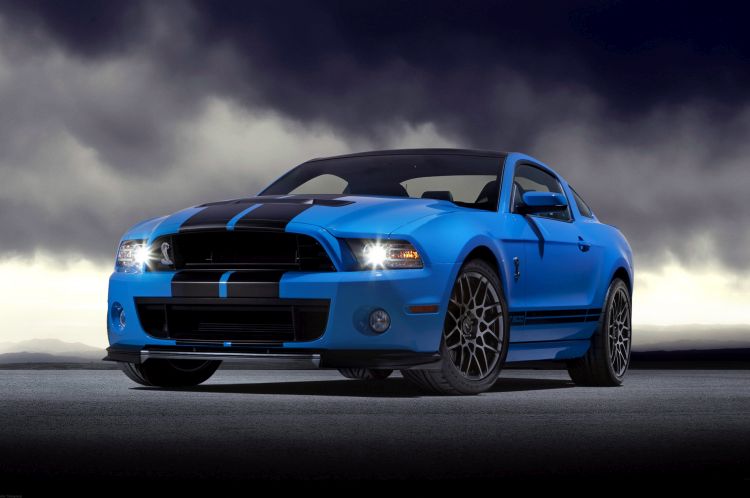 It was the highest horsepower engine ever produced in North America.

The updated head gaskets, the new supercharger, the all-forced engine rotating ability, the updated camshaft profile, and the new cross-drilled blocks and heads all contributed to a superb performance.

The car carried forward the true legacy of the legendary company. 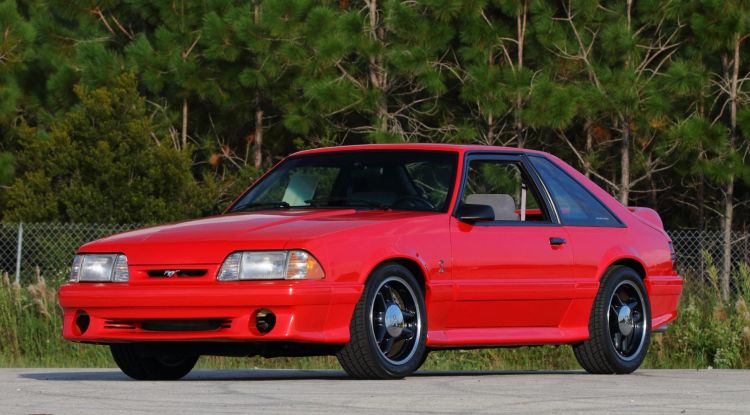 Cobra R might not be the most muscular-looking Mustang ever, but it surely was one of the fastest Ford Mustang ever made.

The car was available only in red color and was meant for serious racers.

The track-inspired handling of the car was a result of the heavy-duty Macpherson Struts, use of a front-strut tower brace and Koni shocks on all four corners. 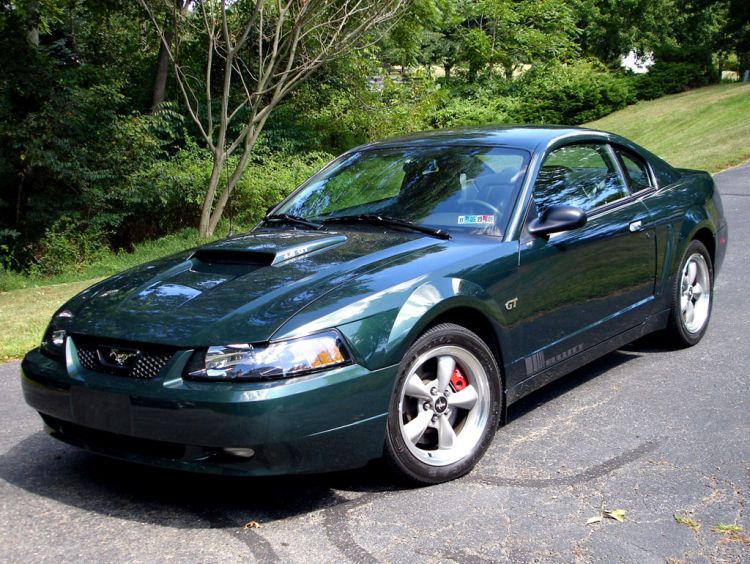 After winning acclaim for its concept version in the year 2000, Ford launched Bullitt that featured a 4.6-liter V-8 tweaked engine offering 265 bhp of power at 5000rpm along with 305 lbs-ft of torque at 4000rpm.

The engine of the vehicle was known for better airflow and power. The lowered and firmer suspension of the car made way for tight handling.

The spirit of a movie car was captured by special exterior enhancements and interior touches.

Other things that made this car a true collectible were the unique wheels, brushed aluminum fuel filler door, and Bullitt badging.

This is one of the fastest Ford Mustangs in the world, could capture the 60mph mark from 0 in just 5.6 seconds. 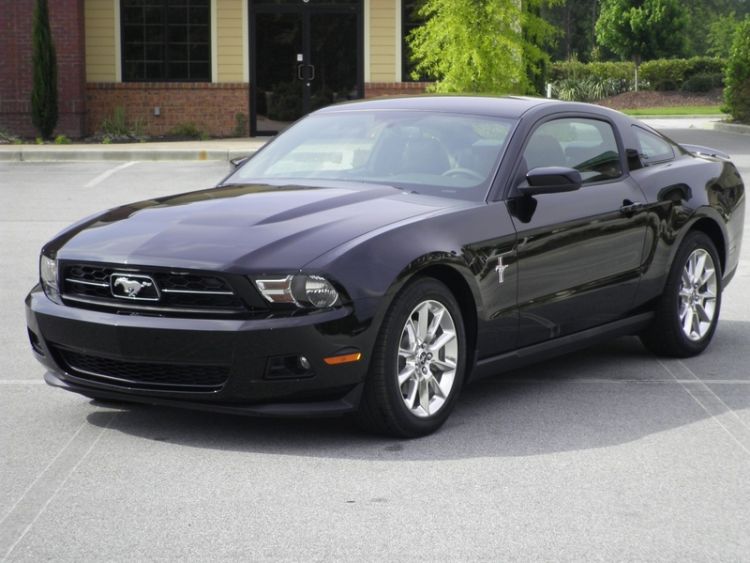 Soon after the 2007 V6 Mustang began to challenge the vintage GT models with a superb quarter-mile run nearing 15 seconds, the company had serious performance in mind for its base engine model.

In 2011 came the Mustang V6 Premium which was equipped with an engine that delivered 305 hp of power and 280 lb-ft of torque.

It was capable of hopping from 0 to 60 mph in just 5.1 seconds and thus registered itself as one of the fastest Ford Mustang. It could run the quarter-mile in 13.7 seconds at 102 mph. 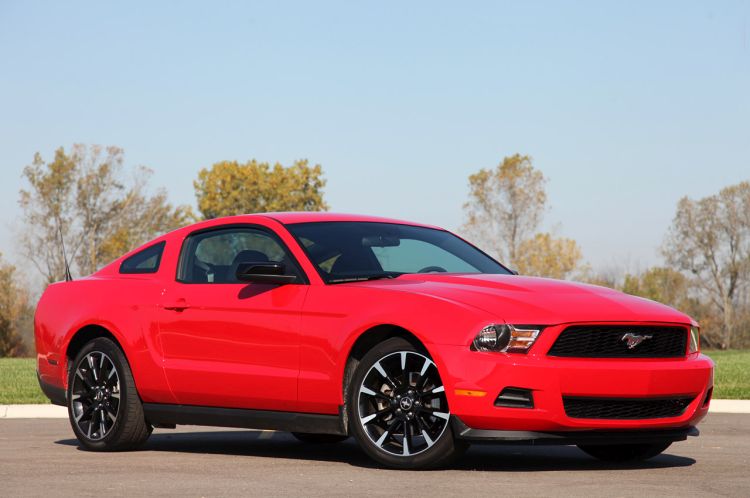 Talk of the fastest mustangs and the recent 2012 Mustang V6 premium instantly comes to mind.

Challenging the vintage GT models, V6 Premium made a very stylish statement in terms of looks as well as performance.

The galloping pony in the grille and the staggered sequential LED rear turn indicators were the main attractions of the car.

The 3.7-liter V6 engine of the car delivered 305hp of power and 280 lb-ft of torque, thus surpassing the output of several previous generation Mustang GTS and emerging as one of the fastest mustangs ever made.

Capable handling, excellent brakes, Ford Sync system, and performance customization were some of the highlights of this beauty. 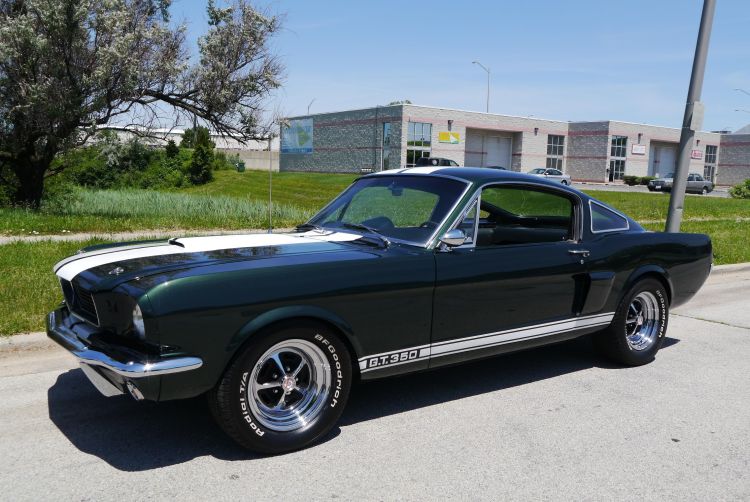 Hitting the scene in 1965, Shelby was welcomed by the enthusiastic press with open arms.

Equipped with suspension modifications for improved handling and powered by a 306 hp Cobra version of the 289 High Performance, this one of the fastest Shelby Mustang was more of a race car than a road car.

The car offered a special brake package consisting of big drum brakes at the rear and 11-inch disc brakes up front.

It was fitted with the standard Ford 289 cubic inch V8 engine that oozed out 271 hp of power. The suspension was 4-speed all-synchro unit with closed ratios. 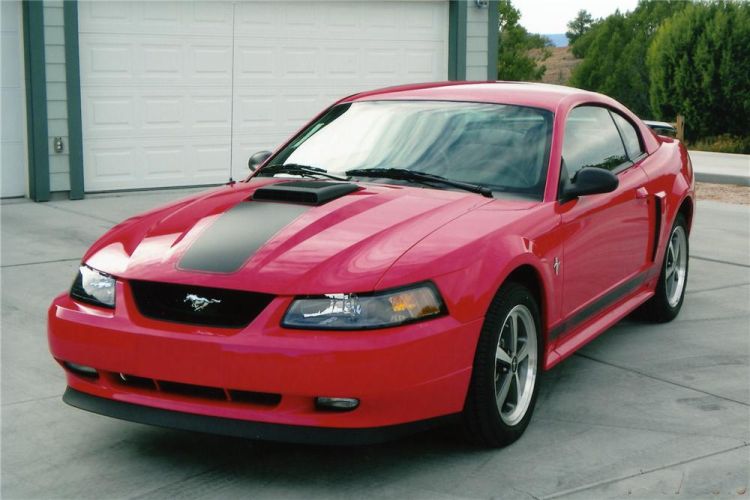 After the release of the 2001 Steve Mac Queen-inspired Bullitt, Ford launched the 2003 Mach 1 that sported a shaker hood scoop based on the original 60s model.

The semi-glossed black deck spoiler and the large wheels enhanced its looks.

This car with a retro look carried a 4.6-liter V8 engine capable of delivering 305 hp of power along with 320-pound ft of torque.

It came with a specially tuned exhaust set-up. 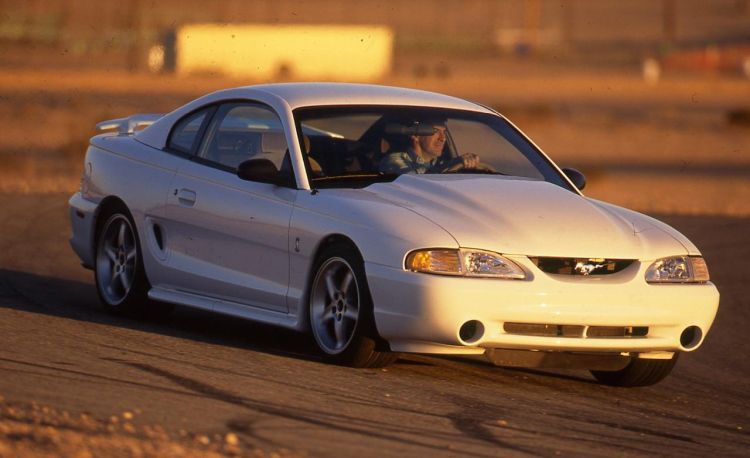 Promising plenty of performance, the 1995 Mustang SVT Cobra R was another one of the fastest Mustangs ever made.

The engine offered mighty thrust and the peak velocity of the car touched 151mph.

A five-speed Tramac manual transmission was installed in the car to handle the power torque. The racing abilities of the car were enhanced by the thick stabilizer bars, progressive rate springs, and a front strut tower brace. 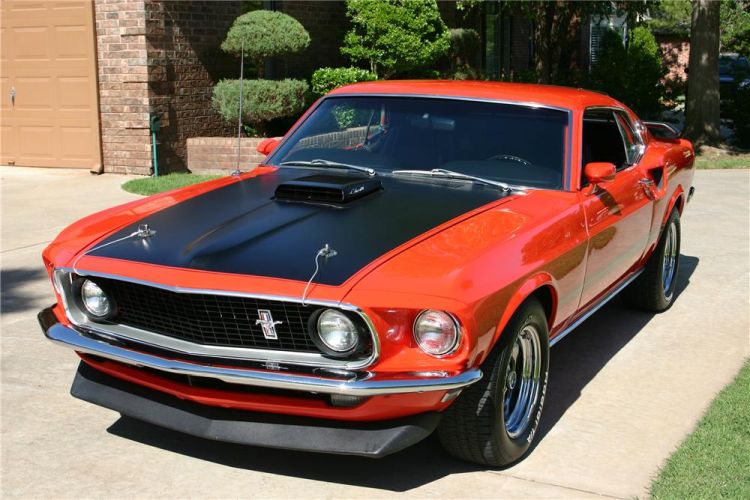 Mach 1 Cobra Jet 1069 model is quite old but it remains one of the fastest Mustangs of all time.

It was faster than the equivalent model of Trans Am which was a hot-selling racing car at that time. 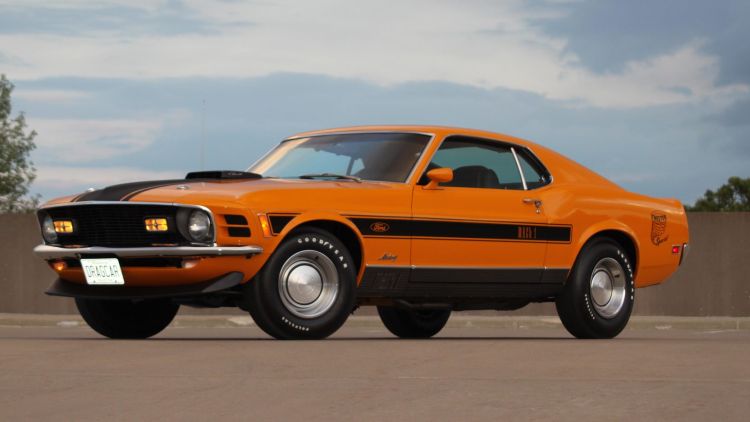 1970 Ford Mustang Mach 1 was an affordable performance Mustang that gave the feeling of a race car driver to an average person. The car was much longer than the previous models and got convex rather than concave side panels.

It sported the V8 engine emitting 351 hp of power. It reached 0 to 60 mph in 8.3 seconds. The most notable update for this model was the addition of finned-aluminum rocker panels.

Another new addition was the rear stabilizer for the standard heavy-duty suspension. 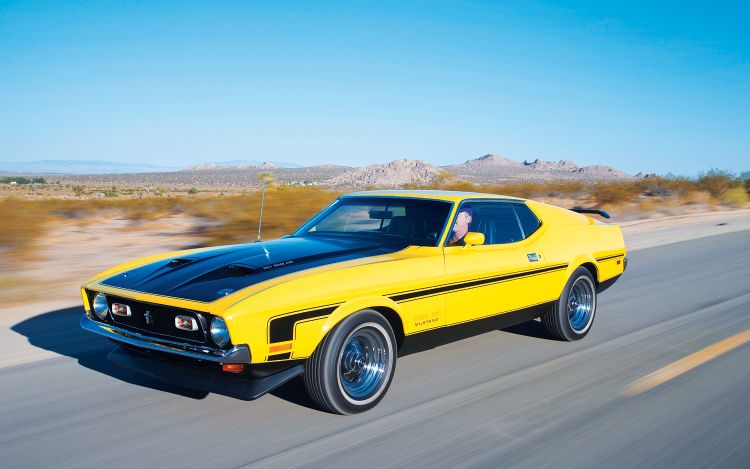 Another car that makes it to the list of fastest Mustang ever made is the 1971 model Boss 351.

Known for both speed and performance, this Ford beast was the last true muscle car produced by the company. Looking back, this car really shines as one of the fastest Ford Mustang in the world.

The car got bolted up to a Hurst-shifted 4-speed manual transmission with Traction-Lok 9-inch rear end fitted with 3.91:1 gears. It covered 0-60 mph in just 5.8 seconds. 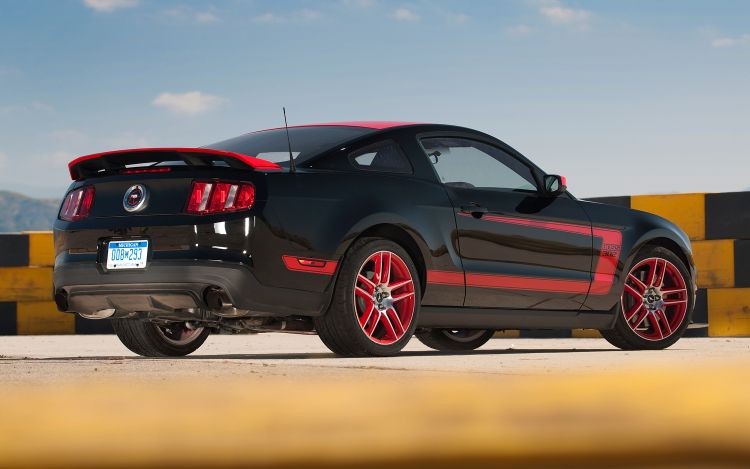 2012 Boss 302 is considered as one of the best offering from the house of Ford and also one of the fastest Mustang in the world.

This supercar also happens to be one of the best looking of all Ford cars till date. It fared better than a GT because of the adjustable suspension along with the amazing optional Recaro seats.

It got high-performance brake pads along with vented brake lines for more control. The tight suspension and fantastic power made this car a hit among racers and collectors alike. It covered 0-60 mph in just 4.5 seconds and ran a quarter-mile in 12 seconds at 116 mph. 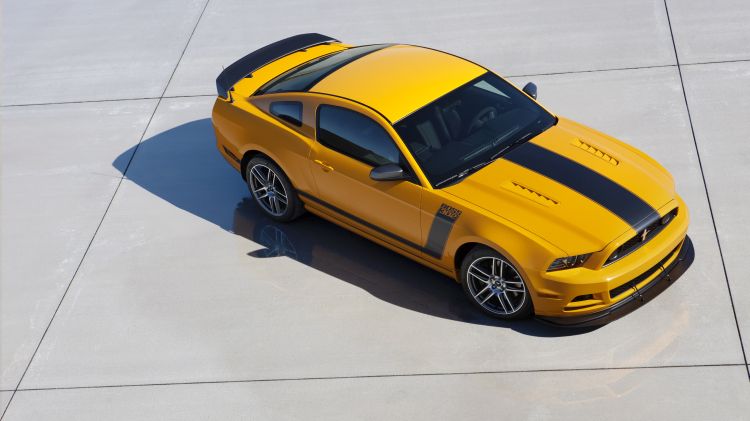 This incredibly capable and spirited automobile could do the 0-60 mph sprint in just 4.2 seconds. This one of the fastest Mustangs ran the standing quarter-mile in 12.7 seconds at 114 mph.

Having higher rate coil springs at all corners, a large diameter rear stabilizer bar and a four-piston Brembos up front enhanced its performance. The car could attain a top speed of 161 mph. 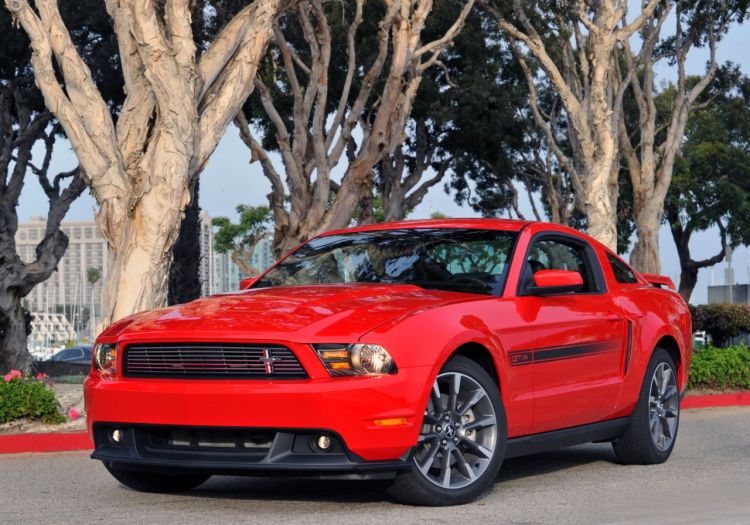 The first one of all Ford cars to come up with the new DOHC v8 engine, GT California Special was a truly special car.

The engine produced 412 hp of power and 390 pound-ft of torque which was enough to propel this beast from 0-60 mph in just 4.3 seconds.

The 6-speed manual transmission with a ‘short-throw’ linkage made driving more fun.

Apart from high level of performance, the car was also known from its excellent fuel economy. It flaunted a unique appearance combined with a comfortable interior.

The car gave intense competition to the likes of Dodge Challenger and Chevrolet Camaro SS.

SVT Cobra was the high-performance version of the Ford Mustang and was built in model years 1993 through 2004.

It was positioned above Mustang GT AND Mach 1 models as it was considered a top-of-the-line model.

The 2000 Ford Mustang SVT Cobra R has a 5.4-liter V8 engine under its hood that delivered a significant 385 hp of power and 385-pound feet of torque.

The sporty chassis of the car combined with the track-oriented gear ratios made it reach from 0-60mph in just 4.4 seconds making it one of the fastest Mustangs ever made. The quarter-mile run was achieved in 12.9 seconds at 110.8 mph. 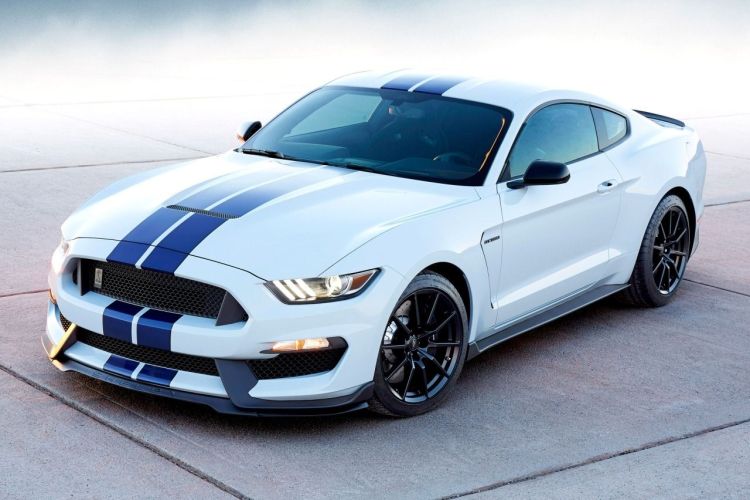 Shelby GT350R is a highly impressive Mustang that is powered by a naturally aspirated 5.2-liter V8 engine.

The power output is 526 hp at 7500 rpm and the torque is rated at 429 lb-ft at 4750 rpm. The car packs in the first adaptive magnetorheological suspension for that impeccable performance.

The car looks glamorous and unique. This fastest Shelby Mustang can spring from 0 to 60 mph in 3.9 seconds flat. Its light clutch and easy steering make way for a nice, heady drive. It definitely much more than a quarter-mile beast. 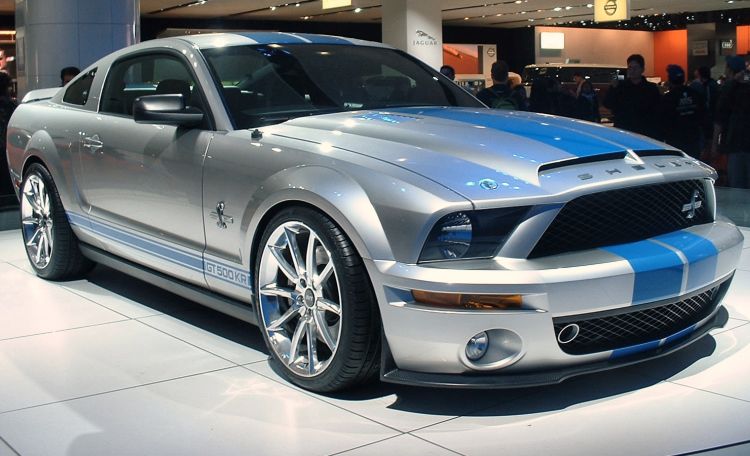 This one was the first Mustang that got the name Shelby in nearly forty years. With a mighty 500hp supercharged 5.4-liter V8 engine, it emitted 480 pound-feet of torque at 4500 rpm.

This vintage muscle monster offered amazing performance. In just 4.5 seconds, Shelby GT500 2007 could jump from 0 to 60 mph of speed.

It could cover a quarter mile in 12.7 seconds at 116 miles per hour. This muscle car wonder took the world by storm with astonishing power and with classic looks.

It continued the legacy of all-around performance that the brand is known for. 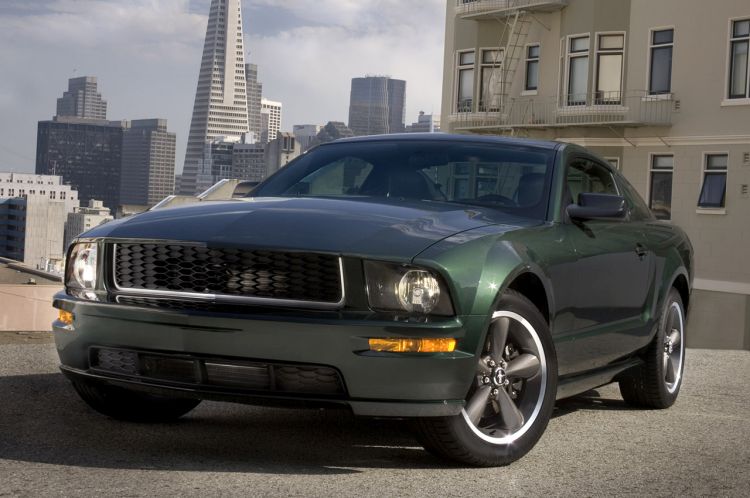 2008 Mustang Bullitt captured the true essence of the Bullitt that featured in the 1968 Steve McQueen flick “Bullitt”. This 2008 model of Bullitt was in line with the fifth generation car’s retro look.

The 24-valve, V8 engine of this car produced 315 hp of power and about 325 pound-feet of torque. This enabled the car to cover 0-60 mph in just 5.0 seconds and making it to the list of fastest Mustangs.

It ran the quarter-mile distance in just 13.7 seconds at 102.7 mph. This classic car delivered a superb balance of power and performance. The suspension tweaks and the special chassis made this possible. 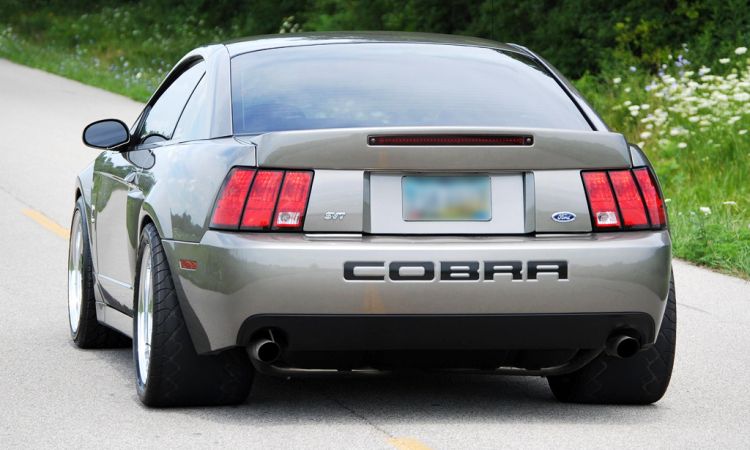 Another one of the fastest Mustangs produced by Ford is the 2003 SVT Mustang Cobra which was blessed with a 4.6-liter V8 engine rated at 390 hp of power and 390 lb-ft of torque.

The car could spring from 0-60 mph in just 4.8 seconds. It ran a quarter-mile in 13.1 seconds. It has an above-average handling capacity as compared to other Ford models.

The instant throttle response on pressing the gas pedal was also one of its highlights. Not only this, the model also boasted of an above-average fuel economy. 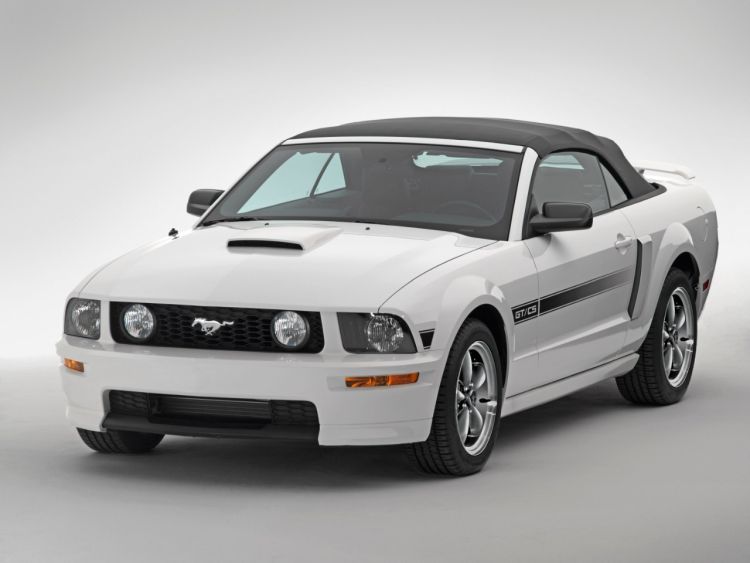 Another one of “throwback” Mustangs was produced by Ford in the mid-2000s. 2007 Mustang GT California Special is one of the fastest Mustangs ever built.

It contained a 24 valve, eight-cylinder engine producing 320 lb-ft of torque along with 300 hp of power. The fuel efficiency rates were 17 MPG for the city and 25 MPG for the highway.

With so many fast cars in its kitty, Ford is not the one to rest on its laurels. The company has recently revealed updates on the latest Ford Mustang Mach 1.

It gets a 480-hp 5.0-liter V-8 engine from Shelby GT350 and is poised to take the car world by storm. This one is also believed to be one of the fastest Mustangs ever made.